AHOSKIE – An aging culvert underneath Martin Luther King Jr. Drive is apparently the reason for drainage issues and erosion problems in the front yard of an Ahoskie residence.

Ernestine Felton has resided at 711 MLK Jr. Drive since moving to town in 1996. Over the years she said the drainage problem has worsened.

“This has been going on for years,” Felton said as she stood adjacent to a storm water drain located in her front yard. “All they’ve (Town of Ahoskie) done is come out here and put some sand in the holes where the water has washed out the dirt there (around the storm water drain).” 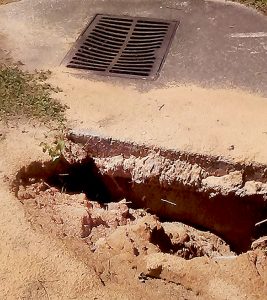 Erosion is evident on one side of this storm water drain in the front yard of a residence at 711 Martin Luther King Jr. Drive in Ahoskie. During heavy rainfall, water backs up in this yard, which has resulted in damage to the driveway. Contributed Photo

Recently, Felton said the town sent their vacuum truck to that area at which time they removed a garbage can.

“There was a big green garbage can stuck in the drain pipe,” she said. “They had a time getting that out of there.”

Felton claims that the years of drainage issues has resulted in damage to her cement driveway.

“You can see all these cracks,” Felton pointed out. “My driveway is crumbling. I want someone to come out here and fix this problem.”

There was a spot in the driveway where one of the cement slabs was an inch or two higher than the other. That’s typically a sign of a rising water level underneath.

Felton said an individual with the North Carolina Department of Transportation did inspect the drainage pipe.

“The (DOT) guy came and took pictures of the (drainage) pipe; he showed me the pictures and said the whole pipe under the road is cracking and caving in,” Felton noted.

“There was a camera placed in the storm drain a couple of weeks ago that showed the metal culvert under road is rusting out and caving in,” McDuffie told the Roanoke-Chowan News-Herald in a telephone interview. “The pipe under MLK Drive at that location needs to be replaced; we’ve communicated that with NCDOT.”

McDuffie also confirmed that the town has on several occasions placed sand where in the holes in Felton’s front yard (at the storm water drain) caused by erosion.

“We’ve gone in and backfilled her yard around the storm drain with sand, but that’s only a temporary fix because the sand goes away when there’s a big rain,” McDuffie acknowledged. “Until DOT fixes the culvert under the road, there’s going to be problems there.”

“The last thing I heard is that DOT is going to have to dig up the road and replace that big pipe,” Felton said. “This hole (a recessed area at the storm water drain) is getting bigger, and my driveway is getting worse. I’m not a rich woman; I can’t afford to fix my driveway.”

Michael Hill, NCDOT District Engineer in the Ahoskie office, said such repairs are made, based on available funding, by NCDOT’s Maintenance Division for Hertford County.