RALEIGH – Brandon Scott Hawks, a former Sergeant with the Gates County Sheriff’s Office, was sentenced to 48 months in prison after he pled guilty earlier this year to stealing handguns during traffic stops.

The sentencing part of the case came in Federal Court on Tuesday in Raleigh, presided over by United States District Judge Louise W. Flanagan. 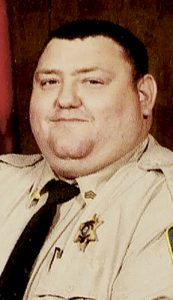 Robert J. Higdon, Jr., the United States Attorney for the Eastern District of North Carolina, said that Hawks, age 35, pled guilty to two counts of possession of a stolen firearm during a Feb. 12 session of U.S. District Court.

“There is nothing more discouraging or disruptive to the proper enforcement of the law than an officer who violates the public trust by engaging in criminal conduct. But, that is just what Brandon Scott Hawks did; and his sentence reflects the seriousness of his crime,” Higdon said in a press release.

An investigation by the North Carolina SBI revealed that between roughly 2014 and 2017, Hawks stole firearms and drugs from traffic stops that he made while employed as a Sergeant with the Gates County Sheriff’s Office. Additionally, Hawks stole or mishandled various types and amounts of illegal drugs, including heroin, fentanyl, oxycodone, cocaine base (crack), cocaine, methamphetamine, buprenorphine, alprazolam, morphine, cathinone, and marijuana. Investigators discovered many of these drugs in his house and patrol car. Hawks was living in Eure at that time.

The SBI arrested Hawks in December of 2017. He had been employed since 2006 with the Gates County Sheriff’s Office.

Hawks was indicted by a federal grand jury in May of last year.

The indictment alleges that beginning on July 23, 2017, and continuing until December 6, 2017, Hawks possessed a stolen firearm, specifically a Glock 26 handgun. The prosecution alleges that the firearm was unlawfully seized by Hawks during a traffic stop on July 23, 2017 and was never submitted as evidence to the Gates County Sheriff’s Office. That weapon was found at Hawks’ residence on December 6, 2017 (the day of his arrest by the SBI and subsequent termination of employment with the Gates County Sheriff’s Office).

Count two of the indictment charged Hawks with possessing a stolen firearm from May 27, 2014 until December 6, 2017.

Count three charged that on December 6, 2017, Hawks possessed, with the intent to distribute, several controlled substances, to include heroin, crack cocaine, cocaine, fentanyl, oxycodone, morphine, methamphetamine, and marijuana. The controlled substances were considered property of the Gates County Sheriff’s Office and were seized during criminal investigations.

“Fortunately, the vast majority of our officers understand and honor their commitment to abide by the law themselves. And our prosecution of law enforcement officers who fail to do so serves to preserve the reputation of all the others and to strengthen the public’s confidence in our law enforcement system,” Higdon added.

This case is part of Project Safe Neighborhoods (PSN), a program bringing together all levels of law enforcement and the communities they serve to reduce violent crime and make our neighborhoods safer for everyone. Since 2017 the United States Department of Justice has reinvigorated the PSN program and has targeted violent criminals, directing all U.S. Attorney’s Offices to work in partnership with federal, state, local, and tribal law enforcement and the local community to develop effective, locally-based strategies to reduce violent crime.

This case is also part of the Take Back North Carolina Initiative of the United States Attorney’s Office for the Eastern District of North Carolina. This initiative emphasizes the regional assignment of federal prosecutors to work with law enforcement and District Attorney’s Offices on a sustained basis in those communities to reduce the violence crime rate, drug trafficking, and crimes against law enforcement.

ASKEWVILLE – “Life in the Fast Lane” is a song by rock-and-roll legends The Eagles, released in 1976. Now, nearly... read more