WOODLAND – It pays to have a broad imagination and a knack for turning those thoughts and vivid imagery into words.

For her work – a collection of short stories entitled “Sleepovers” – Phillips was awarded $10,000. Additionally, Hub City Press will publish “Sleepovers” in the spring of next year.

“I was really surprised (on winning the award) because my work is less conventional than what I thought Hub City would be interested in,” said Phillips, the daughter of Beth Phillips and the late Laverne Phillips. 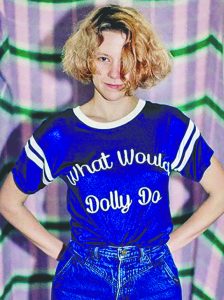 The work of Ashleigh Bryant Phillips of Woodland was judged as the winner of the C. Michael Curtis Short Story Book Prize, awarded annually by Hub City Press. Photo by Leeta Harding

“I still can’t really believe it,” she continued. “Sometimes when I’m bored the idea of having a book published comes to my head and it just delights me. About a year ago I was going around saying “If I ever have a book” and now I really am going to have one.”

Phillips, a 2008 graduate of Northeast Academy who went on to earn a BA in English from Meredith College (2012) and a MFA in Creative Writing from UNC-Wilmington (2017), said she began to develop her writing skills while in the 5th grade.

“According to my family, I’ve always had a big imagination,” Phillips noted. “In the 5th grade I started writing little stories and then I started keeping diaries. My teachers always encouraged my writing too. By the time I ended up at Meredith, I started writing for the newspaper there and then I became an intern at the INDY WEEK in Durham where I wrote about local music. But once I took a creative writing class, I knew that was my favorite kind of writing, it was the most free and challenging and fun.”

As for the title of her book, Phillips said it represents a collection of short stories that she began writing while at Meredith.

“So some of my very first short stories are in there, as well as my latest,” she said. “My work comes from everything that’s already there: what I see and know and experience. So, ‘Sleepovers’ is reflective of my life, growing up in Woodland, being raised in the church, and spending time on my family’s farm. And all the characters in my collection come from that world too, that Northeastern North Carolina world.”

Phillips’s work was judged by Lauren Groff, the author of three novels that were on the New York Times Bestseller list.

“Ashleigh’s prose often holds an incantatory crispness that, while I read along, lulled me into forgetting that I was reading,” Groff said. “These stories derive their power from an almost unbearable dramatic irony and an equally deep hunger for human connection and compassion.

“Most of all, however, I responded to a palpable sense of fearlessness,” Groff continued in her assessment of Phillips’s work. “I see in this collection a steely writer, one deeply moved by her place and her people, but also fully committed to the truth no matter how dark or difficult or complicated it may be.”

The C. Michael Curtis Short Story Book Prize is given to Southern writers who have yet to have a book published. It requires the submission to be at least 150 pages.

Curtis has served as an editor of The Atlantic since 1963 and as fiction editor since 1982. He has discovered or edited some of the finest short story writers of the modern era, including Tobias Wolff, Joyce Carol Oates, John Updike, and Anne Beattie, as well as editing several acclaimed anthologies.

Curtis moved to Spartanburg, SC in 2006 and has served as a professor at both Wofford and Converse Colleges, in addition to being on the editorial board of Hub City Press.

Calling her chance to earn such an esteem honor, named for a writer/editor of extraordinary skills, as a “long shot,” Phillips noted that her knack for writing comes from always being observant and analyzing the world around her, often taking notes in her head.

“So often by the time I do sit down to write, it kind of just spews out of me,” Phillips admitted. “And I like to have a good chunk of time to do that with no interruptions or engagements. So, because I work full-time Monday through Friday, it seems like the weekends are the only times I get to write. It’s nice to have a full day to write, a real treasure.”

When asked to offer advice to aspiring writers who are looking to have their work published, Phillips said, “Look and see where your favorite writers have been published and start submitting there. You’ll get rejected, but that’s okay, it’s part of the process. But nowadays it seems like there’s an audience for everyone’s work, and so many outlets to get it out there. So eventually you will get published somewhere and folks will like it. And if you keep at it then you’ll get published again. You just have to keep writing.”

As to what’s next for Phillips, the first major hurdle to clear is preparing and submitting the final manuscript of “Sleepovers” to Hub City Press.

“Then I’ll start working with them on cover ideas and publicity stuff. I’m really looking forward to planning the book tour; I want to go to as many places as I can. Other than that I plan on loving on my kittens, Possum and Tammy Wynette, they make everything better,” Phillips concluded.