HENRICO – A single-vehicle accident resulted in 17 injuries here Thursday. Three of victims were in critical condition.

The North Carolina Highway Patrol reported that a van, owned by a Jewish Camp based in Richmond, VA, was traveling east on River Road near the Henrico Post Office.

“The driver was exceeding a safe speed, went left of center, ran off the road to the left, collided with a ditch, and overturned,” NCHP Sgt. A.S. Genao told the Roanoke-Chowan News-Herald on Friday morning. “As far as we know right now, the occupants were not restrained by seat belts with the exception of the driver.” 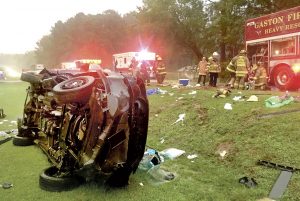 Debris is scattered along a portion of River Road in Henrico on Thursday evening after the driver of a van reportedly lost control, causing the vehicle to overturn. Photo by Gaston Fire & Rescue

Sgt. Genao identified the driver as 21-year-old Yaakov Schwartz of Brooklyn, NY. He has been initially charged with exceeding a safe speed as the accident investigation continues.

The passengers, Sgt. Genao said, were all 17-to-18 years of age. Many of them, he said, suffered broken bones and cuts.

Ed Porter Jr., Chief of Gaston Fire & Rescue, said his department was dispatched to the accident scene at 6:43 p.m. Upon arrival, they found there was one passenger still trapped inside the vehicle. That victim, he said, was extricated by using hydraulic rescue cutters and reciprocating saws to remove the rear two rows of seats in the van.

GASTON – Enviva has plans to invest $45 million at its Northampton County plant in an effort to expand capacity... read more