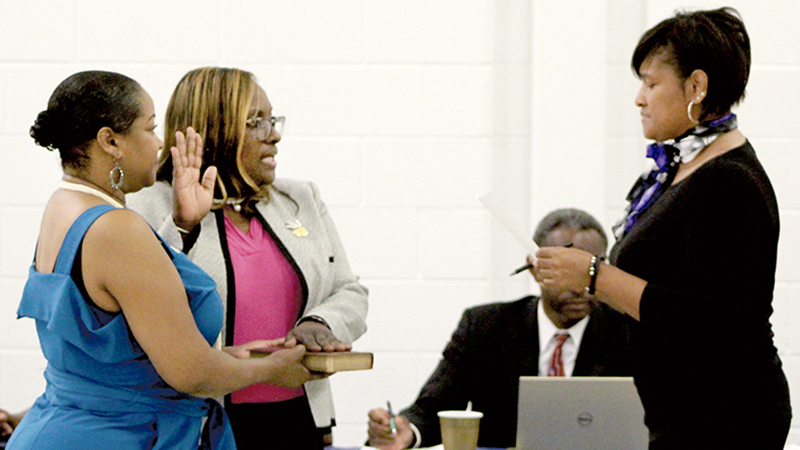 JACKSON – After almost three decades of experience in education in several different positions, Dr. Pamela Chamblee will now add Northampton County Schools District Superintendent to her career accomplishments. A swearing-in ceremony and welcoming reception was held for the new superintendent on Monday, Aug. 5 at Central Elementary School in Jackson.

“It feels like returning back home,” Chamblee told the News Herald. “I’m really humbled by the opportunity to be back in Northampton County. I have been greeted with such warm, tremendous support.”

Chamblee, who holds three degrees from East Carolina University including her doctorate, began her education career in 1991 initially with Hertford County Schools. She later spent 12 years employed with Northampton County Schools, serving in various capacities including the principal at Willis Hare Elementary School, Conway Middle School, and the former Northampton High School-East when the county’s two public high schools merged into one.

For the past few years, Chamblee has worked with Halifax County Schools, where she served most recently as their Executive Director of School Transformation. In April, Chamblee was selected by the Northampton Board of Education to serve as Interim Superintendent after the resignation of Dr. Monica Smith-Woofter.

Now, without the Interim title, Chamblee said she’s looking forward to the work ahead.

“We’re not where we want to be,” she said of the district’s often low-performing results, “but I also can tell you we’re not going to stay there.”

“The goal is always to improve, even if we have to do it on an incremental basis. It’s always about improvement and moving to the next step,” she continued. “I really feel that my purpose here is to ensure that our school system doesn’t remain in a low tier.” 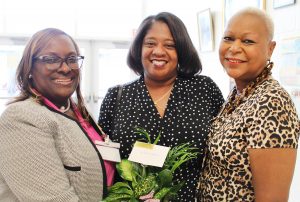 Dr. Pamela Chamblee (left) accepts a plant for her office from Rhonda Taylor (center), chair of the Northampton Board of Education. At right is Shelia Manley-Evans, Director of Northampton DSS. Staff Photo by Holly Taylor

Chamblee has many plans for the district to ensure they strive for improvement and quality education for the students. Accommodating students’ different learning styles is one example, and during her short time as Superintendent so far, the district has been able to receive new textbooks for all the schools.

“I don’t like that one broad sweep of the brush, and everybody gets the same thing the exact same way. That’s not realistic,” she said. “We want diverse materials and resources.”

Chamblee said another focus is making sure they hire quality teachers. She praised her Assistant Superintendent, Kelvin Edwards, for his efforts in recruiting new teachers to fill vacant positions.

“Accountability is our word for the district this year, and that includes me,” she explained. “When I stand in front of the community and in front of the public, I want to be able to let them know here’s where we spent the money, here’s how we’ve done this, here are our results.”

On respect, she continued, “I want students to respect teachers. I want teachers to respect students. I want parents to feel respected when they come in our schools, and staff members to be respected.”

That emphasis on respect, she hopes, will be a step towards making schools bully-free.

“We want our students to know and understand it’s our vision for every school in Northampton County to be a safe and orderly school. That’s nonnegotiable,” Chamblee explained.

In the past few months, Chamblee said she’s taken a listening tour and held a few town hall meetings to hear from parents across the county. From their suggestions, which included an emphasis on school safety and a quality curriculum, Chamblee and her staff have been working to develop a strategic plan to tackle those issues.

“I’m very open. I appreciate the community entrusting me with their conversations and things they hold dear to their heart about our school district,” she added.

She emphasized the importance of community support on education, calling it a “village effort.” Many groups have already reached out to partner with the school district to help out.

Chamblee has had the opportunity to work with students at all levels throughout her career, and she said she admires their honesty and creativity. Overall, she wants the school district to be able to nurture that creativity in all forms.

“The district motto, which speaks to my heart, is ‘changing the lives of children.’ That really speaks to the work we’re going to do,” Chamblee concluded.

Rhonda Taylor, chair of the Northampton Board of Education, said they were confident about the new superintendent.

“I think Dr. Chamblee is very strong. I believe she’s going to get the job done,” Taylor said. “She has the ability to move schools, so we’re looking forward to her moving the district.”