Mrs. Mizelle was born on December 12, 1927 to Jesse H. and Lucy Leggett Outland in Hertford County, NC. Elizabeth was an active member of First Baptist Church of Ahoskie as long as her health permitted. She served as head of the bereavement ministry for many years and was a member of the Sarah Raynor Sunday school class. Elizabeth was very supportive of her community, active in the Jr. Women’s Club and later in The Women’s Club of Ahoskie, being past president and Club Woman of the Year. She was a loving wife, mother, grandmother, sister, and friend that will be deeply missed by all that knew her. 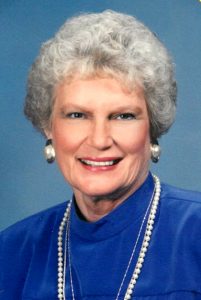 Besides her parents, she was preceded in death by her husband L. E. “Cotton” Mizelle; three sisters, Ruby Jernigan, Myrtle Jordan, and Lucille Hale; and two brothers, Ralph and Cecil Outland.

A celebration of life memorial service will be held on Friday, August 16, 2019 at 2 p.m. at the First Baptist Church of Ahoskie, Ahoskie, NC, with Rev. Trey Gilliam officiating. The family will receive friends immediately following the service, and other times at the home of Patricia and Charles Hughes.

In lieu of flowers, memorial contributions may be made directly to the First Baptist Church of Ahoskie, Capitol Campaign, PO Box 649, Ahoskie, NC 27910 or online by visiting tmcfunding.com, search fund- type: Elizabeth Mizelle.

The Mizelle family would like to send a heartfelt thank you to the staff at the Ahoskie House for their devoted, kind, and compassionate care for Mrs. Elizabeth during her stay there.

Garrett-Sykes Funeral Service – Ahoskie Chapel is handling the arrangements for the Mizelle family and online condolences can be directed to the family by visiting www.garrettsykesfs.com.