The will to survive

MURFREESBORO – Nine-year-old Henry Hodges has endured more in his young life than most adults will experience in a lifetime.

Diagnosed at 22 months-old with AT/RT (Atypical Teratoid Rhabdoid Tumors), which are very rare and fast-growing disorder of the central nervous system, Henry refused to surrender. At that time his doctors said Henry’s chance of survival was less than 10 percent. 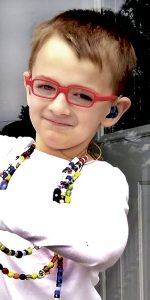 Now, seven years later, Henry lives life as a survivor. And now is your time to help make sure he remains that way.

The tournament is structured just as in the past with two tee times, 9 am and 1:30 pm, with a BBQ lunch and awards ceremony.  A silent auction will be held during the event featuring a variety of items that will appeal to everyone.  The auction items will be uploaded to the event’s website and online bids will be accepted.

There will also be a Cornhole Tournament beginning at 3 pm.

As in previous years, proceeds raised at the 2019 tournament will be used to assist the family with Henry’s continued needs, support childhood cancer research in the area of Atypical Teratoid Rhabdoid Tumors, and provide support to Henry & Daniel’s Holiday Helpers.

“We cannot thank you enough for your support and contributions made over the past seven years in order for Henry’s Heroes Golf Tournament to be as successful as we’ve been,” said Melissa Parker, Henry’s mom. “Last year the tournament raised $15,550 after expenses allowing us to donate $10,550 to support research for ATRT through Alex’s Lemonade Stand Foundation and $1,000 to Henry & Daniel’s Holiday Helpers to assist with covering the cost of gifts throughout the year.  The remaining funds were used to assist the family with covering Henry’s continued therapy services each week.

“We are looking forward to another successful year in 2019 so we can continue our mission of supporting childhood cancer research and children affected by cancer,” Parker added.

Those interested in registering a team for golf, signing up for the cornhole tournament, becoming a sponsor and/or to view the silent auction items, visit the event’s website at https://birdeasepro.com/henrysheroes8/.

Donations can be made to Henry Hodges 115 Jay Trail, Murfreesboro NC 27855 or on the website.  Corporate donors requiring 501(c)3 status, please contact Melissa for information on donating directly to Alex’s Lemonade Stand Foundation.

If you are interested in donating items for the silent auction please contact Catherine Parker at parkerc0612@gmail.com.

“We hope to see you again this year for great food, fun, fellowship and fantastic golf,” said Parker.

The following is a list of ways that you can support Henry’s Heroes 8th Annual Golf Tournament:

Team Registration – $250 – Registration for four team members for a round of golf (choice of morning or afternoon tee time) and BBQ lunch for four.

Tournament Sponsor – $1,000 – Recognition as tournament sponsor before and during event, name on Facebook page & website, golf team registration for four with choice of tee time, and BBQ lunch.

Henry celebrated six years out of treatment and seven years from diagnosis this year.  His scans in April remained stable, so we are extremely thankful to be celebrating these milestones in Henry’s journey.

When we saw Dr. Lowe in April, he called Henry their “valedictorian of AT/RT,” as most children diagnosed at Henry’s age with AT/RT do not reach the five-year survival mark. Dr. Lowe said it best when he said “we are in uncharted waters.”

Henry’s recovery has always been a big question mark. We are aware that things will come up as we move through this journey; as they have recently with unexplained seizure-like episodes and a decline in function mostly affecting his left side. Unfortunately we do not have any answers.  We are still waiting on test results and reaching out to other specialists in search of answers that may explain this recent setback or at least help us develop a plan to make things easier for Henry.  As we wait we try to stay on “the sunny side” as we always have. – Melissa Parker.