Connecting to the world

MURFREESBORO – The internet connects us from our homes and businesses to the rest of the world, and many rely on it daily. That was the focus of a recent “Internet Crawl” in Murfreesboro on Tuesday, Aug. 6. 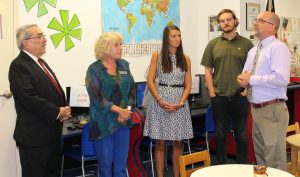 The Elizabeth S. Parker Memorial Library in Murfreesboro was one of the stops on the “Internet Crawl” held on Tuesday, Aug. 6. Chamber of Commerce Director Daryl Williams (right) engages in discussion with the tour group which included Rep. GK Butterfield (left) and Library Branch Manager Judy Hachey (second from left). Staff Photo by Holly Taylor

The Internet Association, a Washington, DC-based organization which advocates for internet businesses, put together the event. They invited Congressman GK Butterfield, who serves as NC’s First District representative, to attend along with representatives from companies such as Airbnb, Facebook, and Lyft.

“We came to Murfreesboro to take a tour with the congressman so we could see how rural America is connecting to the internet and using that to fuel their businesses,” said Sean Perryman, the Internet Association’s Director of Diversity and Inclusion Policy.

“We’ve done a couple of these (crawls) around the country, and it’s always interesting to see just how many platforms that the local economy uses,” he continued. “People use everything from Facebook to Amazon to Paypal. When we think about internet workers, we think of computer engineers, but all of us are relying on it to fuel the economy.”

Perryman explained they always invite the congressional representative of each area they visit so that they can also see firsthand how the internet serves communities everywhere. He also said they encourage more investment in the internet locally.

“I think if people understood just how vital it is to business survival, that we would see more connectivity around the country,” he said.

The group made four stops on Main Street in Murfreesboro, beginning with the Chamber of Commerce, located in the Roberts Vaughan House. Chamber Director Daryl Williams and Chamber President Sara Crowder welcomed the visitors and explained a bit about the town and its internet connectivity.

Both talked about how poor internet access can be a deterrent for developing businesses.

“Those app-based companies (such as Airbnb and Lyft) are something that, if we’re really going to take advantage of those, we’ve got to have better cell phone service,” explained Williams.

Crowder added, “we just don’t have that capability yet here, and that’s something I think would really help to diversify the demographic here in town.”

The second stop on the tour was the Elizabeth S. Parker Memorial Library located only two blocks away.

“The library is a hub of information,” said Branch Manager Judy Hachey. “We have lots of people that come in to use the internet services as well as the computers themselves.”

Many people, for example, use the computers to fill out job applications.

Hachey said she often uses the internet for events where the library screens different kinds of programming on a Smart TV. She added they were looking into getting hot spots and laptops that students could check out and use for completing homework and such.

“It’s just a very vital resource. Without the internet, we would sort of be cut off from the rest of the world,” Hachey concluded. 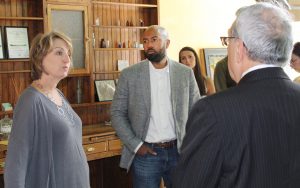 The group’s third stop was Revelle Realty, located not far down the road. Elicia Revelle, owner of the real estate company, spoke about how the internet makes her job much easier.

Because she’s able to list properties on websites such as Zillow, Revelle said they can reach people as far away as New Jersey and California and Florida.

The final stop on the Internet Crawl was Tavern 125, the restaurant located only a few steps away from the real estate office. Owner Keith Bradshaw explained to the group how internet access helps him in almost all aspects of his business, from scheduling hours for the servers and placing food delivery orders to checking the bank account to make sure deposits go through.

Bradshaw also said reviews from websites such as Trip Advisor and Yelp have also been extremely helpful in growing the business and gaining new customers.

People at all four stops on the tour said they use websites like Facebook to reach a wider audience.

“The reality is, businesses all across the country are effectively in some way internet-enabled businesses,” said Michael Bloom, who serves as the Internet Association’s Senior Vice President for Global Government Affairs.

Members of the tour asked questions and engaged in discussion at each stop. Rep. Butterfield said substantial infrastructure expansion is needed, and better broadband access is one of his goals.

“Broadband is so essential,” he explained. “Until rural communities can get broadband, they’re not going to reach their full potential.”

The will to survive