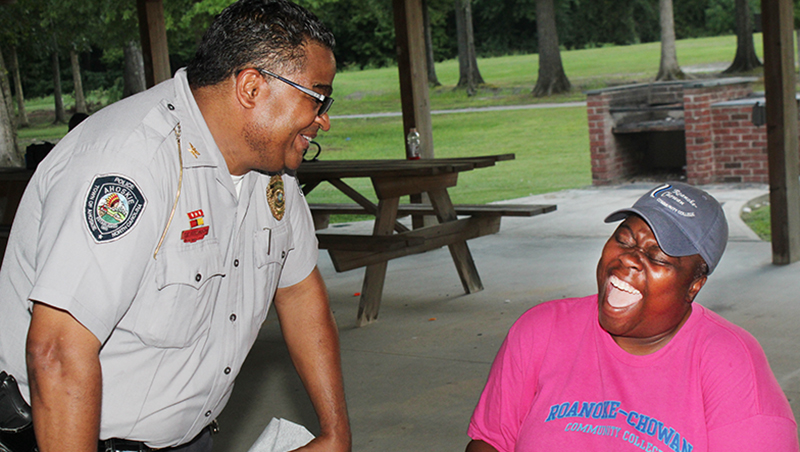 Ahoskie Police Chief Troy Fitzhugh (left) shares a laugh with a local citizen during National Night Out on Tuesday at Ahoskie Creek Park. The one-night affair highlights the partnership between law enforcement and the community. Staff Photo by Gene Motley

AHOSKIE – The best way to build a community is to know your neighbors.

That’s been the idea behind National Night Out, an annual coming-together of law enforcement, first responders, and the communities they serve and protect.

Held on the first Tuesday in August, National Night Out is – according to its national website – an annual community-building campaign that promotes police-community partnerships and neighborhood camaraderie to make neighborhoods safer and more caring places to live. 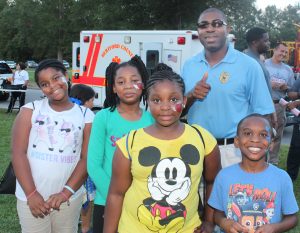 Although other Roanoke-Chowan communities have participated in the one-night special affair, this was the first year the Town of Ahoskie held its own National Night Out (NNO), Aug. 6 at Ahoskie Creek Park.

“It’s about police, community, and partnership,” said Ahoskie Police Chief Troy Fitzhugh. “My staff and I read the brochures, went on the internet, and so we started working on putting it together back in July, and that’s how we were able to come up with the amount of people we have here tonight.”

More than 150 participated from 6 p.m. until 9 p.m. In addition, to local citizens, business owners within the town joined in the national event which featured free hot dogs and hamburgers, games and giveaways for adults and kids, information tables featuring displays from law enforcement and rescue officials, and the Ahoskie Fire Department showing off its new 102-foot aerial platform truck.

“We want more to build on each year,” added Fitzhugh. “It’s about building trust and partnerships in our communities with our citizens.” 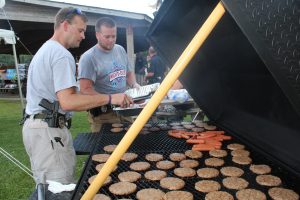 “I’m also here tonight as a mother and a wife because I believe it’s our duty and our obligation to help law enforcement,” said Asbell. “There’s a reason police officers are known as ‘peace officers’; it’s because they serve a dual role as warriors and guardians. They fight when they have to, and they protect otherwise.”

“We ask a lot from law enforcement for them not to get any response from the community,” said Branch. “We’ve seen, even in the last few days, that the violence is only getting worse, and the people must realize it’s their job to help law enforcement.” 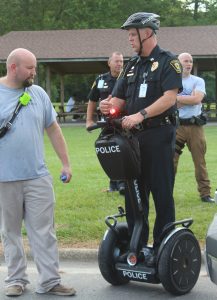 Many parents appeared with their children, not just for the frivolity, but because the night had a stronger message.

“I brought the kids to not just have fun and enjoy themselves, but also to learn respect for the law and respect their elders,” said Juanita Valentine, a mother from Ahoskie.

Cathy Kelly and Noreen Hannon agreed that for a first-time event, the organizers had done a great job.

“It’s a good way to get the community involved with the police force,” Hannon said.

“We have to realize, these folks are here to help us all,” said Kelly.

Ahoskie organizers said the goal was to enhance the relationship between neighbors and law enforcement while bringing back a true sense of community. Furthermore, to have provided a great opportunity to bring police and neighbors together under positive circumstances. 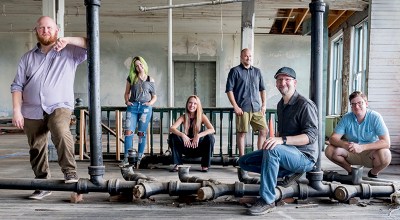