WINDSOR – In Bertie County the soil is rich and at harvest time, the yield is high.

Not just for the crops beneath the sod, but also for things grown above it.

It was with those words that Bertie County School Board chairman Tarsha Dudley recently introduced Dr. Otis Smallwood as the county’s new superintendent of schools.

“You were planted, nurtured, and raised right here in the heart of Bertie County,” Dudley read from a prepared statement. “(Bertie County) is comprised of a culture of good people, and you happen to be one of them.” 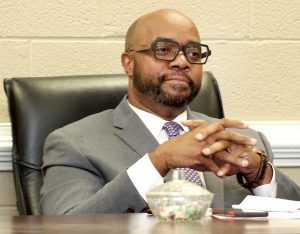 Dr. Otis Smallwood takes his seat alongside Bertie County Board of Education members after being sworn in on July 22 as the county’s Superintendent of Public Schools. Staff Photo by Gene Motley

After a unanimous vote of approval by the school board in June, Smallwood took his oath of office on July 22. Prior to the swearing-in, he spoke with the News-Herald on what his hopes and aspirations are for the very school district that he’s a product of.

Born and raised in the Indian Woods community of western Bertie County, Smallwood is a 1989 graduate of Bertie High School who later attended Elizabeth City State and East Carolina universities before acquiring his doctorate from Nova Southeastern University.

“Dr. Smallwood is a veteran educator with 26 years of experience,” said Dudley. “He has proven himself an effective leader in every area that he has served in public education: bus driver, teacher, assistant principal, director, and for the past several years as an assistant superintendent. The leadership skills he’s developed over the years make him more than qualified to be an effective superintendent.”

The veteran educator began his career in education administration in Bertie County and has worked in Human Resources as Director of Information Technology for the district from 2000-2008; and has spent the past 11 years as Assistant Superintendent of Jones County (NC) Public Schools in charge of Human Resources.

“I really am glad to be back,” Smallwood said. “(I’m) still excited, overjoyed, and just humbled by the opportunity that’s been afforded me to come back.”

While Jones County is smaller in land mass than Bertie, the two counties, both primarily rural and agrarian, have much in common.

“What I hit on more in Jones (County) were relationships,” he acknowledges. “Because it’s a small area, I was able to get to know the community very well; know every teacher on a first-name basis, know their families, know many of the students by name. With a small district staff, we were able to communicate very well together and experience trust in one another for the betterment of kids. I say that because relationships are critical when you’re talking about leadership.”

While he discloses that there has been quite a bit of transition since he last worked in the district, and that he knows quite a number of the people in and out of education that remain, he has a three-point plan he wants to put in place.

“I’ll be talking about this a lot as I return,” he emphasized. “First, we start with building relationships; next, focus on teaching and learning; and then try to recruit and retain the best teachers we can possibly get.

“While I left 11 years ago, and a lot of others have also moved away for various reasons, we have a lot of good people who have remained, and those people are what we need to make an impact. Whatever the reason others have left, I’m not going to worry about. Right now, my goal is to try to recruit those people back,” he related.

Smallwood says he noticed on social media someone had started the hashtag: #Building A Better Bertie, and it gave him a jolt of inspiration.

Smallwood will have a leg-up on his recruitment and retention plan. Bertie County Schools is one of four districts that have been awarded the Advanced Teaching Roles grant from (the N.C. Department of Public Instruction), which is named ‘Bertie THRIVEs’. While the superintendent applauds it, he also wants more.

“I hope to have some conversations with the County Commissioners real soon about trying to get a supplement out of the local budget, or with the Finance Office, to see how we can finagle some things to give our teachers a local supplement,” Smallwood declared. “I believe we’re one of the districts in the area that doesn’t offer anything. We were able to do it (at Jones County), and I think we can do it here.”

Smallwood says opportunities are out there, they just have to be tapped into, and done so responsibly.

“I want to make sure when we set goals, we continue to progress monitor, so we don’t miss any opportunities for funds, for grant funds,” he noted. “We have to make sure we utilize our resources effectively and make the best use of local funds, aligning things to district goals; re-prioritizing things so we can have better use of taxpayer dollars.

“Everyone appreciates a good school system, good teachers,” he acknowledged. “A strong school system can lead to a strong economy.”

“But we can do the best we can for Bertie,” he contended. “I think we can be a leader in our region.”

Smallwood wants a strong convocation when teachers and staff begin the 2019-20 school year.

“We’ve got to walk the walk and talk the talk,” he said. “I hope people can see that within me because I know the culture here, I plan on toughing it out. I’ll be on the line of fire with teachers and principals. When people start to see that, then the ‘Rah-rah’ they display in August will be a presence that will last well into the school year.

“If I show them they can trust me, then hopefully they can keep pushing through to their next milestone,” he concluded.

Gatling arrested while in court