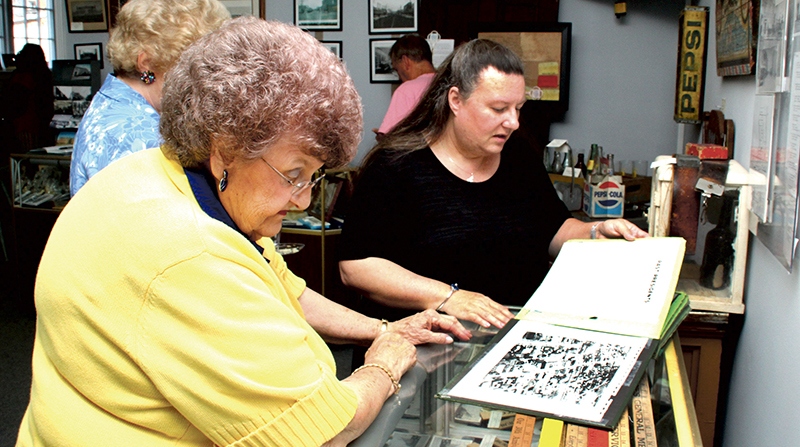 The July 27th grand opening of a museum in downtown Ahoskie – part of the new Regional Visitors Center – drew a large crowd that viewed various items of the town’s history. Staff Photo by Cal Bryant

After several months of preparation, the old Bank of Ahoskie building, located on the corner of Main and Railroad streets, is now serving a two-fold purpose: a museum on the ground floor along with space on the second floor for ta Regional Visitors Center office and other offices/meeting rooms as well.

The museum, an effort of the Ahoskie Woman’s Club, is currently open each Saturday from 10 a.m. until 1 p.m.

“We’ve been amazed at the number of people thus far who have shown interest and visited the museum,” said Ahoskie Woman’s Club President Pat Byrd. “We are the custodians of these historic items and very proud to have them on display for all to see. This museum features the great history and people of our town.”

Byrd praised her Woman’s Club predecessors as the original custodians of the historic items.

“Our club members back in the early 1990’s actually started this museum project,” Byrd recalled. “Three of those members are still with us – Elaine Myers, Dot Newsome and Carolyn Brinkley. They began the process of collecting and preserving these items and we’re still collecting them today.”

Byrd said the museum was originally housed on the second floor of the Garrett House, the home of the Ahoskie Chamber of Commerce.

“Since I became the club president in 2018, I made it part of my plan to look for a place better suited for a museum, especially from the standpoint of not having people to climb a staircase to see it,” Byrd stressed. “When the opportunity came about to lease the old Bank of Ahoskie building, we jumped on it. “We’re glad to see this museum in a place that can be easily accessed by everyone.”

Byrd also credited the assistance of Paige Myers, a local woman who works at the North Carolina Museum of History in Raleigh.

“Her expertise has been of great help in our project,” Byrd said. “And we also received help on historic item preservation from Chowan University. We also need to thank Wally McKeel of McKeel’s Jewelry here in Ahoskie for donating some of the display cases.”

Bea Harrison, Chair of the Ahoskie Woman’s Club History Committee, is perhaps the right person at the right time to tackle a project of this magnitude. She is, in her words, “a lover of history.”

“That dates back to my childhood days, sitting around and listening to my father and his seven siblings share stories about the good old days,” Harrison said. “I joined the Ahoskie Woman’s Club last year when I first heard about this museum project. I really got head over heels in it when Amy (Braswell, Executive Vice President of the Ahoskie Chamber of Commerce) asked me to become a member of the Ahoskie Regional Visitors Center. All of us have worked hand in hand on this project.”

Harrison agrees with Byrd regarding the ease of accessibility to the old Bank of Ahoskie.

“There’s plenty of parking available,” she noted, “and plenty of display space on the first floor.

‘Since we’ve started this project, people here in the community have come forward to offer their items of historical significance to be displayed. We have high hopes that will spur others to donate or loan their items as well,” Harrison added.

Future plans call for the Woman’s Club to partner with local schools, arranging for students to tour the museum and learn about the history of Ahoskie and the area. There’s also a plan in the works to conduct historical lectures.

“This will only be as good as the community allows it to be. Come and see what we have, you’ll be pleasantly surprised. We want to share the story of Ahoskie and its people,” Harrison concluded.

Those wishing to donate or place items on loan to the museum are asked to email gfwcahoskie@gmail.com.

Another key partner in the renovation of the old Bank of Ahoskie building is the local Chamber of Commerce.

As part of an economic development plan for downtown Ahoskie devised by Braswell, she said one of the first steps was to have a Regional Visitors Center.

“This is a multifaceted plan,” Braswell noted. “We needed to find just the right location for the Visitors Center and we have been so fortunate to work with Ed Robert Evans and wife, Sandra (the owners of the property). We’re leasing the building from them at a very affordable rate due to our commitment to go in and renovate the building. We’ve put in a new heat/air system and flooring; gave it a fresh coat of paint and fixed the roof.

“They (Mr. and Mrs. Evans) didn’t want to see it sitting empty and deteriorate. They’re tickled that it’s being used and Mr. Evans has dropped by on occasion to see the renovations,” Braswell added.

“Jordan has made it very clear that she wants to come home when she graduates and we would love to hire her full time,” Braswell remarked.

The building’s second floor includes office space for a videographer currently under contract with the Visitors Center; an educational room where the lecture series can be held; a catering room; and a spacious meeting room overlooking No Man’s Land Park. That space can be rented for meetings/company gatherings, etc.

Braswell unveiled a possible plan of what to do with the third floor. She said a Residency program, with graduate students from the ECU Brody School of Medicine, is currently being developed. Those students will perform their Residency requirements at Vidant Roanoke-Chowan Hospital and possibly at Roanoke-Chowan Community Health Center as well.

“We’re hoping to turn the third floor into residential apartments for those medical students to live while working here in Ahoskie,” Braswell said. “Maybe they’ll fall in love with Ahoskie and stay here and raise their family here.”

As for the museum on the first floor, Braswell said that compliments the entire project.

“The Woman’s Club project has been successful right from the start,” Braswell remarked. “Their collections continue to grow. Plus this effort has also resulted in the digital formatting of old Ahoskie High School yearbooks and films from athletic events. What the Woman’s Club is doing goes right along with our plans for economic development downtown.”