A memorial service will be conducted Monday, August 5, 2019 at 11 a.m. in the Wilkerson Funeral Chapel, Greenville, by the Rev. Jon Strother. Honorary pallbearers will be L. E. Smith, Jr., Jack Cherry, John Everett, Billy Jefferson, and Jimmy Raper. Burial will take place in the Ayden Cemetery at a later date and portions of his cremated remains will be scattered in his favorite places. 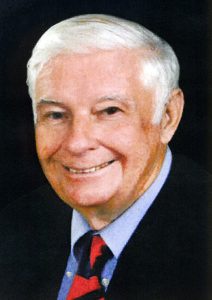 George was born near Winterville, NC on May 5, 1937 as the first child of Junius Wiley and Sarah Stancil. He attended schools in Ayden and Winterville, North Carolina and graduated from Ayden High School in May of 1957. He attended East Carolina University in Greenville and graduated with a B.S. in 1963 and a Master’s in Education in 1967. He received a Sixth Year Degree in 1971. Brownie Stancil, also a 1957 graduate of Ayden High School, and George were married on June 18, 1961. They raised two sons, Anthony “Tony” Wiley Stancil and Jon Scott Stancil.

He was a member of several professional organizations, including North Carolina Association of School Administrators and the ECU Chapter of Phi Delta Kappa. He was an honorary member of the Bath Ruritan Club, serving 5 years as their treasurer.

He was preceded in death by his parents, Junius Wiley Stancil and Sarah Stancil; sister, Lou Ellen Meeks; and his son, Captain Anthony “Tony” Wiley Stancil, USMC, a graduate of the United States Naval Academy.

The family will receive friends on Sunday, August 4, 2019 from 5-7 PM at Wilkerson Funeral Home.

In keeping with his generous nature, his eyes were donated through the NC Eye Bank.