MURFREESBORO – Once again, people from all around will gather in Murfreesboro to enjoy amusement rides, delicious food, local arts/crafts, fun contests, toe-tapping music, and much more. And it’s all for the love of one specific fruit: the watermelon.

The theme this year will be “Honoring Those Who Served” as a tribute to the military. 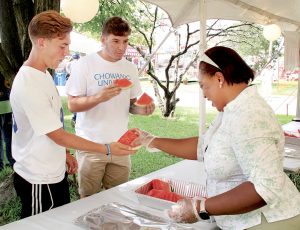 As is a three-decade tradition at the North Carolina Watermelon Festival in Murfreesboro, free slices of the locally grown sweet summertime treat will be available throughout the event, which opens later today (Wednesday) and runs through Saturday. File Photo by Cal Bryant

“We are proud to honor those who served, both our veterans and those who are serving now,” explained Kay Thomas, chair of the committee which puts together the event each year.

Murfreesboro native Joe Dickerson, a World War II veteran, had been scheduled to serve as the grand marshal for the Saturday morning parade, but he passed away on July 29.

“We are deeply saddened to learn of the death of Joe Dickerson,” Thomas continued. “But we will still be remembering his life at the festival. He will still be memorialized.”

To keep with the festival’s military theme, a performance from the USO Show Troupe from New York City will be one of the highlights for the whole event. They are scheduled to perform at 7:30 p.m. on Friday, Aug. 2. In case of rain, Thomas said the performance will be held at the Jefcoat Museum auditorium.

“The show will go on. That’s definitely going to happen no matter what,” Thomas said, adding that their performance was one of the things she personally was looking forward to the most.

Murfreesboro Mayor Hal Thomas said too that they were all excited about seeing the USO Show Troupe performance.

“That’s never happened around here before. The USO is pleased to come here because they say they’ve never been invited to northeastern North Carolina,” the mayor added.

Other featured musical guests will include Main Event Band on July 31, The Mickele Buck Band on Aug. 1, and Pizazz on Aug. 3. Various performers will also take the stage during the day on Friday and Saturday.

“I’m always excited about the rides. I think that just makes the festival so special for everybody,” K. Thomas added.

The annual event will also feature the Watermelon Festival Market and the SUPER tent with a wide range of vendors for people to browse through and find something interesting. Some crafts include local pottery, homemade food products, wood-working items, doll clothes, and more. These will be open on Friday and Saturday.

The Show Place Tent, sponsored by Vidant Roanoke-Chowan Hospital, will host a variety of activities on Saturday.

As always, an array of food vendors will be on hand to provide sweet treats and savory meals for festival-goers. Additionally, several local groups will sponsor meals each day.

Longtime attendees of the festival know to look forward to annual events such as Saturday morning’s 5K Run/Walk and Watermelon Festival Parade kicking off at 10 a.m. Everyone who attends the parade will receive a handheld American flag.

The annual watermelon eating and seed spitting contests will also be held once again. Younger competitors can delight the crowd as they participate in the Little Princess Contest and the Little Mr. and Miss Farmer Contest. All of those events are on Saturday.

A new event this year will be “The Little Princess Tea Party” at 5 p.m. on Saturday under the Show Place Tent. Everyone is invited to wear their favorite hat and enjoy light refreshments. Other new events include watermelon bowling and watermelon crafts. K. Thomas also noted that helicopter rides were back again for the first time in several years.

The festival will conclude as usual with its huge fireworks show scheduled for 9:15 p.m. Saturday night, weather permitting.

“We’re going to dance in the street, we’re going to ride rides, and we’re going to eat homemade ice cream and the other goodies you don’t get to usually eat,” said H. Thomas. “We’d love to see you out there.”

“We’re proud of its success and what it offers to the region. We want everyone to come and enjoy. We’re going to keep on no matter what,” she concluded.