MURFREESBORO, NC – Joseph Quinton Dickerson, age 96, passed away on July 29, 2019 at his home with his wife and granddaughter by his side.

Mr. Dickerson was born in Northampton County, NC, on April 29, 1923, a son of the late George and Fannie Jenkins Dickerson. Joe was a successful businessman, having owned and operated the Western Auto in Murfreesboro for over 40 years. He was active in his community and was a community leader, serving on town council, was a founding member of the Murfreesboro Rescue Squad, was instrumental in building the town swimming pool, and was the organizer for getting the Veterans Memorial in Murfreesboro. Joe was a longtime Mason and Shriner, having just received his seventy-year pin from the American George Masonic Lodge #17, AF&AM. 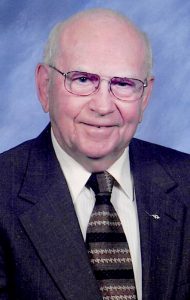 Mr. Dickerson was very proud of his service to his country in the US Army. He was a TSGT with the 29th Infantry Division, Company E, being among the first wave invasion at Omaha Beach on June 6, 1944. During his time in the Army, he earned four Purple Hearts, two Bronze Stars, one Silver Star, and the French Medal of Honor.

Besides his parents, Joe was preceded in death by his first wife, Eyssel Dickerson, and his daughter, Debbie Dickerson Bird.

Left to cherish his memory is his wife, Rebecca; his granddaughter, Elizabeth Bird Ross and husband, Adam of Myrtle Beach, SC; his grandson, Joey Bird of IN; three great grandsons, Connor Ross, Cooper Ross, and Carson Ross; and a great granddaughter, Caitlyn Ross, all of Myrtle Beach, SC; his son-in-law, Tommy Bird of IN; and two step sons, Gary Pearce and wife, Gwyn of Raleigh, NC, and Fred Pearce and wife, Sandi of Key West, FL.

The family will receive friends on Thursday, August 1, 2019 from 7:30 pm until 9:00 pm at Garrett-Sykes Memorial Chapel, Murfreesboro, NC, and other times at the home.

A celebration of life service will be held on Friday, August 2, 2019 at 1:00 pm at Murfreesboro Baptist Church, Murfreesboro, NC, with Rev. Lane Bass officiating. Burial will follow in Riverside Cemetery with Military Honors.

In lieu of flowers, the family requests memorial contributions may be made directly to the Murfreesboro Baptist Church, 200 W. Main Street, Murfreesboro, NC 27855 or you may donate online by visiting www.tmcfunding.com/search then type Joseph Dickerson.

Garrett-Sykes Memorial Chapel is handling the arrangements for the Dickerson family and online condolences can be directed to the family by visiting www.garrettsykesfs.com.