Heart of a Champion

AHOSKIE – He was so looking forward to making it to Yankee Stadium sometime in 2019.

But unlike rounding first base and headed for second with a stand-up double, as he did no many times on the diamond, this time he came up short.

Brandon Warren – the only player named 2A Northeastern Coastal Conference Player-of-the-Year all the years he played varsity baseball – passed away on Sunday following a three-year battle with cancer. He was 26 years old. 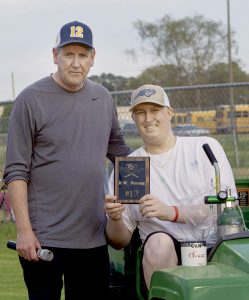 “He was a tremendous baseball player, and an even better person,” said Hertford County High baseball coach Chris Towell, who coached Warren for the entire varsity career. “He was a competitor; it didn’t matter if he was a freshman or a senior, that’s just the kind of kid he was. The kind you were glad to have on your side, and one you hated to face.”

Warren had the talent, the work ethic, and the championship credentials.

In 2010, during his junior season, Warren went on an offensive tear for the Bears.

Along the way for that campaign, Warren hit .582 with eight home runs and 41 runs-batted in. But he didn’t just excel at the dish, he also posted a 9-2 record as a pitcher with a 2.30 Earned Run Average, and he led the entire state of North Carolina with 131 strikeouts.

“Brandon had an excellent season,” Bears baseball boss Towell remembered. “His numbers speak for themselves. You couldn’t ask for much more out of a player.”

Warren’s spirit help rally the Bears throughout his career. From an 0-12 mark in 2008 to 10-2 one year later and the conference championship where they finished with a 17-6 overall mark.

“He’s just a model of perseverance,” added Towell. “And it’s just amazing how he’s dealt with what he’s had to deal with these last three years. He will truly be missed.”

“And from now on it will be held in his memory,” Towell acknowledged. It was his idea, thanks to boosters within the program, to start the tradition on ‘Brandon Warren Night’ of all the Bears players wearing a #12 jersey with Warren’s name stitched on the back.

“It wasn’t just Hertford County, people from all around the area thought a lot of Brandon,” said his Post 102 American Legion coach David Ellis. “He was very coachable, and as a leader he would get on his teammates if they made mental mistakes behind him as a pitcher. That’s just the kind of competitor that he strived to be.

Indeed, for the past several seasons, Coach Steve Saunders’ First Flight High Nighthawks players have paid tribute to Warren during their annual Ahoskie game with the Bears. 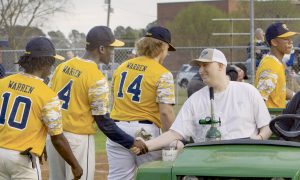 The annual fundraiser baseball game for Brandon Warren, where players all wore jerseys bearing his name, will continue as a memorial tribute to the former four-time Player-of-the-Year who passed away last weekend. A.A.Imaging / Andre Alfred

“They started that in 2011,” said Ellis. “Now its eight years later, and they still remember and honor him during that game.

“We always tried to give him something different every year, and this year our theme was ‘Brandon Strong’,” Ellis related. “We wanted something to reflect how courageous he was with his fight, and to be strong.”

As the idea of the memorial grows, Ellis says he hopes now the monies raised can go toward a scholarship for a Hertford County High student in Brandon’s name.

“He (Brandon) didn’t have many faults,” concluded Ellis. “But if being highly competitive is a fault, then we need more of it, because he hated losing.

Despite ‘losing’ his last great at-bat, at least now, his coaches say, he and his Dad, Stan, who was one of his greatest inspirations, and who himself passed away prematurely in 2017, can now talk baseball again around the pearly gates.