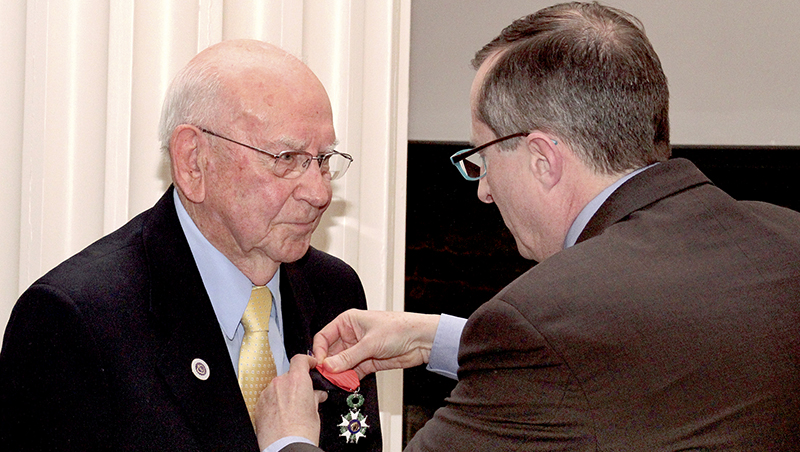 MURFREESBORO – He was a part of the Greatest Generation, one who never lost sight on what it meant to serve his nation and his community.

Joseph (Joe) Quinton Dickerson, the Roanoke-Chowan area’s most highly decorated serviceman of World War II, died at his Murfreesboro home early Monday morning at the age of 96. But what an impact he made before taking his final breath.

“We’re all going to miss Joe. He was a great person and a true hero,” said Murfreesboro Mayor Hal Thomas. “He worked hard and gave up his time and effort and money to help everybody else.” 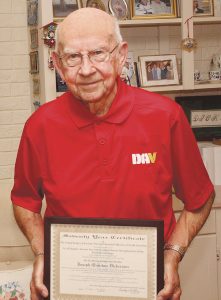 Less than two months after celebrating his 21st birthday, U.S. Army Tech Sgt. Dickerson was among the first wave of troops to storm ashore on Omaha Beach on June 6, 1944 – the famed D-Day invasion that helped turn the tide of the war against Nazi Germany.

“He’s always said that the Lord blessed him with 75 years more than those people who were on that landing craft with him. He was the last survivor of all that,” added Mayor Thomas.

After being wounded in battle, Dickerson healed and was sent into another major conflict – the famed Battle of the Bulge. There, he was wounded again, shot in the arm. He was “patched up” and sent back into battle before being seriously wounded in the head by a piece of shrapnel. Dickerson suffered a coma and woke up in a hospital in Paris two weeks later from where he was discharged and sent home.

For his brave and courageous actions during those two major battles, Tech Sgt. Dickerson was awarded four Purple Hearts, two Bronze Stars, and the Silver Star.

“I have always held a great admiration for Joe Dickerson,” said U.S. Army Sgt. Major (Retired) Johnnie Ray Farmer, a veteran of the Vietnam War who returned to his native soil to serve four terms as a Hertford County Commissioner and also was a JROTC Instructor at Hertford County High School.

“Joe was a highly decorated combat veteran,” Farmer continued. “Some do not realize the significance of the combat awards he received. They didn’t come easy; they all represented his true love of his comrades through the acts of bravery he committed. I know he was proud of the fact that General Dwight D. Eisenhower personally pinned one of those Purple Hearts on him.

“Our community has lost a great man, a great citizen, and a great American,” Farmer concluded.

After being honorably discharged from military duty, Dickerson returned to Murfreesboro, landing a job at Western Auto under owner George Gibbs in 1946. Four years later, Dickerson purchased the store from Gibbs and the rest, as they say, is history. He owned and operated Western Auto on Main Street in Murfreesboro for a shade over 40 years.

His community spirit was always on display.

In 2006, Dickerson was at the forefront of an effort to have a Veterans Memorial built in front of the Murfreesboro Municipal Building, located on Broad Street.

Joined by 13 other local military veterans, Dickerson and his allies generated $62,000 in donations for the project over a six-month period.

In May of 2007, the four-tiered Georgian granite memorial was dedicated. It features over 500 names of local individuals that served in the Navy, Army, Marines, Coast Guard and Air Force from World War II, Korea, Vietnam and Gulf wars.

Benches, landscaping and a brick pathway surround the memorial.

“He was the leader of the group that got the veteran’s memorial started there in front of Town Hall,” Mayor Thomas explained, also noting a special part of the memorial was dedicated to Wounded Warriors. 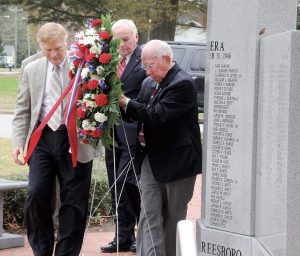 Joe Dickerson (right) joins other local military veterans as they place a wreath at the Murfreesboro Veterans Memorial in November of 2014. Dickerson was the leader of a group that raised money to build the Memorial in 2007. File Photo by Cal Bryant

Dickerson was also a man of faith in his Lord and Savior Jesus Christ.

“I only knew Joe for a little less than two years, but even in that short period of time, and even at the end of his life, the depth and the sincerity of his faith were unmistakable,” noted the Rev. Lane Bass, pastor of Murfreesboro Baptist Church. “I remember vividly the brief conversation that we had in the hospital on the 75th anniversary of D-Day. He was fully aware of his situation and he knew that the end was not far away, but in his eyes and in his voice was an incredible peace. For he knew that God had blessed him with a good, long life, with the love of his family and community, and with the opportunity to use his life to make the lives of others better – an opportunity that he took more than once.

“I can say confidently of Joe that his faith was at the core of who he was. Joe was many things to many people – a husband, a father, a soldier, a citizen, a hero. But what made the difference in each of those roles, the thing that made him so good at all of them, was his steady faith in Jesus Christ,” Rev. Bass added.

In 2010, Dickerson was one of four military veterans from Hertford County to have their handprints cast to become a part of the county’s display at the North Carolina Veterans Park in Fayetteville.

In 2014, Dickerson was among 14 North Carolinians presented with the Legion of Honor, the highest decoration awarded by France. French Consul General Denis Barbet awarded the medals in the old House Chambers of the historic North Carolina State Capitol in honor of the men who helped liberate France from the clutches of Hitler’s Germany during World War II.

Dickerson was also a driving force behind the annual Memorial Day and Veterans Day ceremonies held in Murfreesboro. He often brought along some of his prized World War II memorabilia to display.

Additionally, he was a longtime Mason and Shriner. In August of 2017, Dickerson was awarded a 70-year service pin from the American George Masonic Lodge #17, AF&AM.

“He was a lifelong friend, and he was a brother Mason,” said Joe Minton, owner of Colonial Pharmacy in Murfreesboro where a small portion of Dickerson’s World War II artifacts are displayed.

“I moved to Murfreesboro in 1970 and that’s when I met him. There are different degrees in masonry, and he carried me to get my 32nd degree,” Minton explained. “He was a very trusted friend and someone I could count on anytime.”

The family will receive friends from 7:30-9 p.m. on Thursday, Aug. 1 at Garrett-Sykes Memorial Chapel, located on Main Street in Murfreesboro.

A celebration of life service will be held at 1 p.m. on Friday, Aug. 2 at Murfreesboro Baptist Church. Burial, with Military Honors, will follow in Riverside Cemetery.

Heart of a Champion