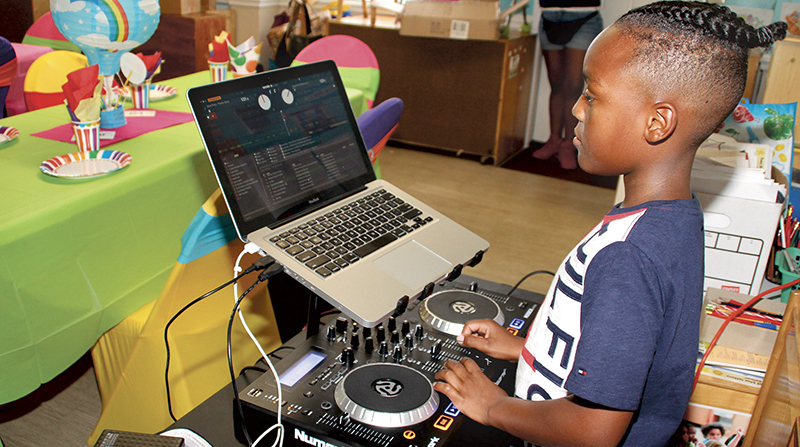 At age seven, Demetrius Perry, Jr. has already established himself as a Disc Jockey (DJ). He is pictured here at a paid gig held recently at Davis Kids College, located in Ahoskie. Staff Photo by Jazmine Bunch

AHOSKIE – Most kids sit on the colorful mats of their kindergarten classes and shout out their dreams of one day being an astronaut, ballerina or a firefighter. But for Demetrius Perry, Jr., his dreams are a bit different, and have started a little earlier than most.

Going by the name “DJ Double D,” Perry is a 7-year-old DJ who has been taking local events by storm.

Although he officially started his career in April of this year, Perry showed a love for music before he was even a year old.

“Ever since he was about 10 or 11 months, he’s been beating on stuff, making different beats, and doing different things with music,” said Jessica Davis, Perry’s mom. “He’d always turn the radio on, and the different stuff [he’d watch] on TV had to be about music.”

Perry is a rising second grade student at Bearfield Primary School. He realized that he wanted to be a DJ because he knew he loved music.

For his 5th birthday, Davis threw him a birthday party fully equipped with presents, goodies, and a live DJ. Spotting the significance of her son’s growing passion for music, she recalled asking the DJ that she hired for tips on getting started.

“He pushed me on out there, and I figured I’d invest in something that my child wants to do,” she said, “and here we are.”

She purchased the equipment in December of 2018 for his 6th birthday and his first event was the Spring Fling dance at Riverview Elementary School in May of this year. From there, DJ Double D has been booked and busy, making an appearance at birthday parties, dances, cookouts and even kid proms.

Davis stands beside Perry at every event, helping him with set-up, DJing and clean up. She has created a social media for his DJ services and she manages his social media presence.

Taking on a cool career at such a young age, Perry had to learn a few things about the turntables before he could start.

Perry said that his favorite part of being a DJ is that he gets to listen to and play music. Next on his radar is a back to school event in Bertie County.

Still working on finding the perfect rate and perfecting his craft, the child DJ has plenty of time to learn and grow in his newfound career.