HERTFORD – Throughout his career in the U.S. Army, Jermaine D. Goodman has proudly and honorably served his country around the world. But when it came to his promotion to the rank of Major, there’s really no place like home.

Standing in front of family and friends during a ceremony at his home church (The Greater Saunders Grove Missionary Baptist, located near Hertford) on July 7, Goodman had his Captain bars removed and replaced by the golden oak leaf insignia of a Major.

Born Feb. 4, 1984 in Gates, Major Goodman – the son of the Sharon Goodman and the late Carl Goodman – is a 2002 graduate of Gates County High School. He enlisted into the United States Army Reserves on June 21, 2001. He graduated from Basic Training in July 2002 and Advanced Individual Training four months later. 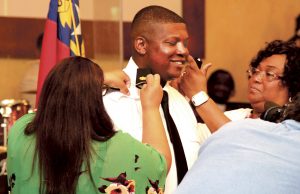 Sandy Goodman (left) is joined by her mother-in-law Sharon Goodman as they placed the insignia of an U.S. Army Major on former Captain Jermaine Goodman during a promotion ceremony held on July 7. Staff Photo by Cal Bryant

The newly promoted Major said God has prepared him for this moment.

“Our experiences are the vibrant colors that God uses to paint the work of art we call life,” Goodman remarked. “The Master is always in control of the masterpiece.

“I am so grateful for the love and support shown to me and my family over these past years,” the Major continued. “However, our successes are not our own and today is not about Major Jermaine Goodman. Today is dedicated to everyone who believed in my potential and took the time to show their love and support to my family.”

He credited his now late father as the person responsible for his work ethic and drive.

“My father passed away five years ago, but his ministry lives on through me and lives of those in this room today,” Major Goodman said. “Life is the legacy you build and the family God blesses you with.”

He thanked his wife, Sandy, and their two children – Cameron and Cassidy – for being there by his side, offering their support for the job he and others in the military perform on a daily basis.

“We’ve been through seven changes of station and right now we’re all living out of 15 pieces of luggage in a hotel,” he stressed. “Through it all you guys have been patient and resilient. The highlight of my day is coming home to you.”

U.S. Army Lt. Colonel (Retired) Vince Ross served as the ceremony’s guest speaker. He is Major Goodman’s former ROTC Professor of Military Science at Elizabeth City State University, from where Goodman graduated with a degree in Sociology and a minor in Military Science.

“When I first arrived at Elizabeth City State (from New York) to teach, I saw a bunch of kids who were like myself, and Jermaine was one of those,” Ross reminisced. “He stood out. I prepared him for the Officer Corps. You need to understand that on the officer side of the military, you get two chances at a promotion. If you don’t cut it either time you have to leave the service. To be here today and see my former student receive another promotion makes me extremely happy and proud.”

Ross recalled writing a letter to Goodman, stating that was one of his ways to motivate aspiring young men looking to advance in the military.

“He wrote me back, and I’m going to share that letter with you today from 14 years ago,” Ross said.

In Goodman’s return letter – penned in June of 2005 – he told Ross his words inspired him to reach higher.

“You motivated me,” Goodman wrote to Ross. “Sometimes the pressure you put on us makes us want to blow our tops, but it made me a better person. Your vision is my vision.”

Looking squarely at his former ROTC student, Ross said, “Jermaine, this promotion is not just based on what you’ve done before, but what the Army sees in your potential for the future.”

While he further encouraged Major Goodman to continue to chase his military dreams, Ross suggested that he also needs to find some balance with his family life, especially with his two young children.

“You don’t get those years back,” Ross said, referencing the current ages of Goodman’s young children.

U.S. Army Staff Sgt. Sharla Murrill called for the “Publishing of Orders” from the President of the United States – signaling the start of an oath given by Ross to Goodman that advanced his rank from Captain to Major.

Goodman’s wife and mother stood performed the task of removing the captain bars from his uniform, and then replacing that void with the Major insignia. His son then placed, for the first time, the Major’s new dress uniform hat on his father’s head.

Carla Goodman referenced her big brother as her “forever friend.”

“There’s been so many family functions that he’s missed because of serving our country. We wanted to show our love and respect today for his service. We love you; we will always support you,” she said before singing a song (“Forever is a long time”) in his honor.

Major Goodman recently completed his latest assignment at Fort Irwin, California (as the Cobra Team S1 OC/T at the National Training Center) and is preparing for his next one – with the 18th Military Police Brigade in Germany. He begins that assignment on July 15.

Previously, Goodman was stationed at Vilseck, Germany (2006-2009) with the 2nd Stryker Cavalry Regiment serving as a Chemical, Biological, Radiological and Explosive (CBRNE) Officer. He deployed to Sadr City and Mosul Iraq for 15 months on July 2007 to October 2008. He was stationed at Fort Hood, TX from December 2010 – June 2012 as the Battalion S-1. He deployed with 55rd CSSB on January-December 2011.