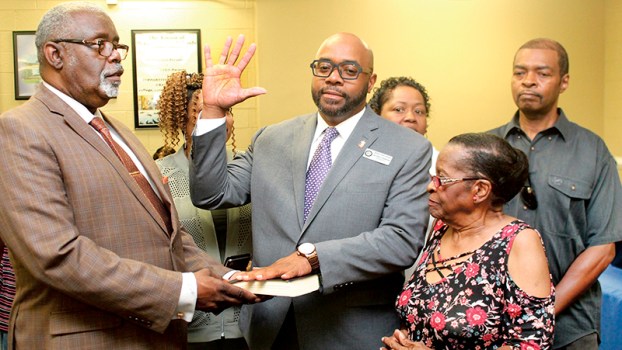 Dr. Otis Smallwood (center) takes his oath of office as the new Superintendent of Bertie County Schools at a meeting of the school board on Monday in Windsor. In addition to the superintendent’s brothers and sisters (background), on hand for the ceremony are pastor Rev. Dr. Ricky Banks of St. Stephen’s Church in Elizabeth City (left) and Smallwood’s mother, Maggie Smallwood (right). Staff Photo by Gene Motley

WINDSOR – After nearly three weeks in transition for his new job, Dr. Otis Smallwood was formally sworn in on Monday as the next Bertie County Schools superintendent.

Smallwood, a native of Indian Woods in western Bertie, is a 1989 graduate of Bertie High School. He later attended Elizabeth City State and East Carolina before acquiring his doctorate from Nova Southeastern University.

Originally on staff with Bertie County Schools, Smallwood began his career in education administration where he worked in Human Resources as Director of Information Technology for the district from 2000-2008. He has spent the past 11 years as Assistant Superintendent of Jones County Public Schools in charge of Human Resources.

He was unanimously approved for the Bertie post at a June 14 special meeting of the school board.

In Bertie County, Smallwood received a four-year contract, which carries a base salary of $145,000, or roughly $11,000 more than his predecessor, Dr. Catherine Edmonds.

Monday, a crowd numbering nearly 70 persons returned to the board’s meeting room at the Central Office for the ceremony – part of the regularly scheduled July Board of Education meeting – and the reception that followed. With his mother, Maggie, and pastor, Dr. Ricky Banks of Elizabeth City’s St. Stephens Baptist Church, both clutching the Bible, Smallwood’s was administered the oath of office by Sixth Judicial District Chief Judge Brenda Branch.

“We’re delighted to have all persons serve the students of our district,” school board chair Tarsha Dudley read prior to the ceremony. “However, it makes it even more special when you get to see a native come back to give back to a place where their roots still run deep.”

“He used to say it’s a mighty poor farmer who won’t eat his own crops,” she intoned. “Well, today is harvest time because Dr. Smallwood, you were planted, nurtured, and raised here in Bertie County where the soil is rich and the yield is high. We are comprised of a culture of good people, and you happen to be one of them.”

One of Smallwood’s predecessors, John Smith, who became the county’s first black superintendent in the late 1990’s, made the trip from his retirement home in Harnett County just for the swearing-in.

“He comes to you well prepared, Bertie County,” Smith stated. “My advice to you, Dr. Smallwood, is lead, son, lead. One of the main responsibilities of this board is to go out and find a good leader; and we know who you are and what you are going to do: lead, be firm, and do your thing.”

Retired farmer Carl Bond, a member of the Bertie Alumni Community Association (BACA), said as a fellow alum, everyone who ever supported the Falcons would throw their support behind the new superintendent.

When it came time for Smallwood’s remarks, he stated he would be spending the next few weeks gauging the pulse of the county with three specific early goals in mind: teaching and learning, retention and recruitment of teachers and staffers, and forging strong relationships.

“There’s a saying that I’m going to borrow for my campaign: and that is, ‘Building a Better Bertie’ (which comes from the educations solutions website), Smallwood acknowledged. “I’m going to spend the next few days re-acquainting myself with the community; re-forging relationships with people I haven’t seen in a while. I want relationships that support one another, with politicians, the business community, and others as we journey forward to build a better Bertie.”

As Independence Day rolls around each year, landscapes across the country become decked out in red, white, and blue reminiscent... read more