AHOSKIE – One individual is in custody while two others allegedly involved are believed to still be on the run following the Thursday morning armed robbery of a downtown Ahoskie business.

Domenique Lequan Douglas, who was initially detained for questioning, was later charged with Felony Robbery with a Dangerous Weapon, Felony Conspiracy to Commit Robbery with a Dangerous Weapon, Felony Possession of a Stolen Firearm, Felony Second Degree Kidnapping, Misdemeanor Assault by Pointing a Gun, and Misdemeanor Larceny. 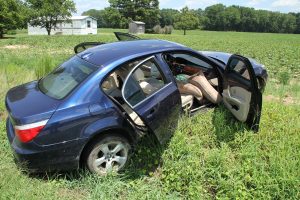 This vehicle, occupied by three individuals believed to have been involved in Thursday morning’s armed robbery of an Ahoskie business, wrecked along Lee Jernigan Road approximately 10 minutes after the heist was reported. Staff Photo by Cal Bryant

Douglas appeared before a magistrate and bond was set at $350,000 secured with a court date set for Friday, July 19.

According to Ahoskie Police Chief Troy Fitzhugh, the robbery occurred at 11:34 a.m. at the Red Room Arcade, a business located at 102 East Main Street. Officers responded to the scene and upon their arrival learned that two masked men with firearms had entered the establishment and were able to take an undetermined amount of cash.

“Both suspects exited the Red Room from the side door adjacent to Railroad Street,” Fitzhugh stated. “A blue four door vehicle was seen speeding at a high rate of speed, travelling east on Church Street.”

At approximately 11:44 a.m., the Hertford County E-911 Center received a report an accident had occurred on Lee Jernigan Road, south of Ahoskie.

It is believed that a car carrying suspects wanted in the armed robbery came to rest following a single vehicle wreck. More than one occupant of the vehicle then fled on foot.

Upon arrival in the area of the accident, officers were able to locate Douglas.

“We have personnel in the woods looking for two suspects who fled from the vehicle that wrecked,” said Hertford County Sheriff Dexter Hayes who was at the scene on Thursday. “There were two K9 units, one from Ahoskie Police and one from the Northampton Sheriff’s Office, that joined the search, as well as a drone unit from the Bertie Sheriff’s Office flying overhead.”

In addition, along with the Bertie County portion of Lee Jernigan Road, law enforcement vehicles could be seen either patrolling or sitting stationary along Center Grove Road and Williford Road well into late Thursday afternoon.

Fitzhugh said at this time this case is still being further investigated. Anyone with any information in this case is urged to contact Lt. Jeremy Roberts of the Ahoskie Police Department.

The gift of life