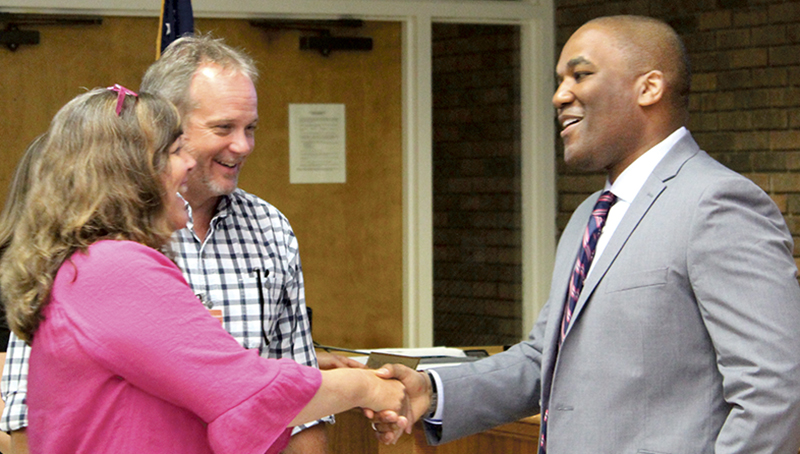 Newly hired Northampton County Manager Charles Jackson (right) was formally introduced to the public at Monday’s meeting of the county’s Board of Commissioners. Staff Photo by Holly Taylor

JACKSON – “We have a new captain in town,” announced Charles Tyner, Chair of the Northampton County Board of Commissioners at the beginning of their regular meeting here on Monday, July 15.

Tyner was referring to Charles Jackson, the new County Manager who began his first official day on the job that morning.

“On behalf of this Board and this community, we welcome you to Northampton County. We’re glad that you’ve come to be with us, and we’re looking forward to you being with us for a long time,” Tyner continued before adding jokingly, “as long as we all get along.”

A short reception to welcome Jackson was held after Tyner’s introduction. People in attendance for the board meeting had a chance to enjoy good food while meeting the new county manager.

As previously reported by the News Herald, Jackson’s hiring was announced by the commissioners at a special called meeting on June 24. He assumed the role from Robert Murphy, who had served as Interim County Manager in the months after the resignation of Kimberly Turner in February.

Before coming to Northampton County, Jackson previously worked with the State of North Carolina Government, the City of Raleigh, and most recently, the Richmond City Council. The majority of Jackson’s years of public service have been focused on fiscal policy, operations management, and program evaluation.

Jackson is a native of Whiteville, NC and a graduate of UNC-Charlotte with a degree in Public Administration.

“Mr. Jackson does have credentials. He does have experience. He brings to us a whole lot of experience,” Tyner said.

According to Jackson’s employment contract with the county, he will receive an annual base salary of $95,000. After a year of service, the County can consider implementing a performance bonus. Jackson will also have his performance evaluated annually.

In the contract, Jackson also agreed to relocate his permanent residence to Northampton County by January 15, 2020. He will be provided $2,000 from the County towards his moving expenses.

Jackson serves “at the pleasure of the County’s Board of Commissioners.” In case of termination, Jackson will continue to receive his existing salary for six months or until he commences employment elsewhere. If Jackson chooses to voluntarily resign, he is not entitled to receive severance pay.

As the meeting concluded, Jackson took a moment to express his excitement for his new position.

“I’m very humbled to be chosen for this great responsibility,” he said. “My goal is to build relationships with the entire community across the county. And my goal is to listen, find a solution for your ideas, and bring them back to the Board.”

“My door is always open. You can call me or drop by anytime. This is your county. This is your government. I’m just a servant,” he concluded.