AHOSKIE – In our rural, wooded area, it’s common to see a deer or two in our headlights down a country road or some dashing to the woods to avoid cars. But on Friday afternoon, an injured fawn made quite the appearance on Academy Street, causing a traffic jam directly in front of the Vidant Roanoke-Chowan hospital.

The animal was struggling to find footing, making circles in the road. This caught the attention of 24 year-old Tyref Smith, who was exiting the hospital when he spotted the fawn running between the road and the grassy area of the hospital. 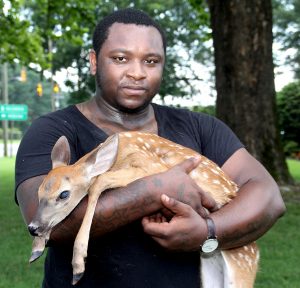 With traffic at a standstill on Academy Street, Tyref Smith was able to rescue this frightened fawn on Friday afternoon in front of Vidant Roanoke-Chowan Hospital. Staff at Vidant RCH attended to the fawn’s injuries before it was turned over to Hertford County Animal Control. Photo by Jazmine Bunch

With Smith’s coaxing, the fawn finally laid down after about 15 minutes. He began to calm the animal by holding it and giving it water. Upon realizing that the animal was injured, others who were near-by asked for assistance from the workers in the hospital.

“He came in and said ‘y’all don’t turn nobody away,’” said Vidant RCH employee Beth Bowen, followed by a laugh.

Lynnet Melton and Stacy Futrell, two RNs who serve in the labor, delivery and nursery unit of Vidant RCH, helped to bandage the two injured hind legs of the animal.

“It was a baby,” Futrell said with a chuckle, “and it needed help.”

Smith lives in Raleigh, but said he was in Ahoskie visiting a relative at the hospital. He currently attends online college for graphic design at Southern New Hampshire University, but he shared that he has a love for animals.

While waiting for Hertford County Animal Control, he continued to hold and comfort the animal until they arrived. In this incident, both Smith and the fawn just so happened to be at the perfect place at the perfect time.