AHOSKIE – One suspect is in custody and two more remain at large after a smash-and-grab robbery in the early morning hours here on Thursday that involved crimes committed across four law enforcement jurisdictions. 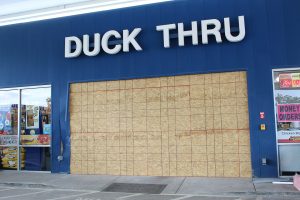 Plywood covers the main entrance to the Duck Thru convenience store, located on NC 561 adjacent to the Ahoskie Inn. It was at that location in the early morning hours of Thursday that the driver of a truck stolen less than one hour earlier in Murfreesboro rammed into the store and three suspects stole an ATM located inside. Staff Photo by Jazmine Bunch

Currently, the only individual charged is 18-year-old Devin Christopher Vaughan of Tom Browne Road, Murfreesboro. He stands charged by the Ahoskie Police with three felonies – breaking and entering, larceny after breaking and entering, and felony conspiracy – along with misdemeanor injury to personal property.

According to Ahoskie Police Chief Troy Fitzhugh, the daring thieves’ heist actually began in Murfreesboro and ended in Bertie County.

Sometime around 1 a.m. on Thursday, July 11, three suspects broke into Metal Tech of Murfreesboro, located on Broad Street, and stole a commercial vehicle, a truck.

While the Fitzhugh said the route taken by the suspects from northern Hertford County to Ahoskie is unclear, about 40 minutes later the same vehicle was used to ram the entrance to the Duck-Thru convenience store, located on NC 561-West next to the Ahoskie Inn.

Vaughan is believed to have been the driver of the stolen truck, which led to him being charged by the Murfreesboro Police Department with felony larceny of a motor vehicle, and two misdemeanors – first degree trespass of property, and injury to real property.

Following the smash-up at the store, the thieves entered the premises and were able to secure and load a portable ATM machine onto the truck and then flee.

Law enforcement units within the region were alerted to the theft and a be-on-the-look-out (BOLO) bulletin was issued.

Sometimes around 3 a.m. a vehicle fitting the description was spotted by a Hertford County Sheriff’s deputy who attempted to perform a traffic stop near Ahoskie. However, the vehicle failed to stop, eventually entering Bertie County where it crashed near Powellsville.

Fitzhugh said the ATM has been recovered and returned to its owner.

The investigation into the whereabouts of the two unknown suspects continues.

“We need to thank the Hertford County Sheriff’s Office, the Murfreesboro Police, and the Bertie Sheriff’s Office with their help in this case. We all worked very well together and will continue to do so until the last two suspects are apprehended,” Fitzhugh said.