Late that same afternoon, the Bertie Sheriff’s Office took Jeffrey Ray Harrison into custody. Harrison, 51 of Martin County, had been on the run since Saturday morning, holed up somewhere in the woods off Godwin Road after attempting to elude arrest for vehicle theft. Along the way, Harrison had also attempted to run over a Windsor Police Officer. 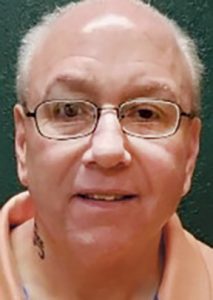 Bertie Sheriff John Holley reported Harrison’s arrest at 5:20 p.m. on Monday, bringing an end to nearly three days of uneasiness among the residents living in the immediate area of the search.

“We located him not very far from where he went into the woods on Saturday,” Holley stated.

When asked if Harrison surrendered peacefully, Holley remarked, “He didn’t have too much fight in him after being on the run for over 48 hours.”

The Sheriff added that Bertie EMS was summoned to check on Harrison’s medical condition. He was then booked into the Bertie-Martin Regional Jail under a $135,000 secured bond.

In Bertie County, Harrison is facing charges of assault with deadly weapon on a Government Official, felony flee to elude arrest, possession of stolen vehicle, and resist, delay and obstruct. He is scheduled to answer those charges during a July 10 appearance in Bertie County Criminal District Court.

“I would like to think all the agencies involved in the search for Harrison, and thanks to the Bertie Sheriffs Office for apprehending Harrison. I’m thankful that Harrison was taken into custody without anyone being injured,” stated Windsor Police Chief Justin Jackson.

On Saturday morning, the Windsor Police Department was called to the Duck Thru convenience store located beside the ABC Store in Windsor. There, Windsor Police Officer J. Mizelle saw Harrison parked between the Duck Thru and the ABC store. Mizelle asked for Harrison’s identification while a second Windsor PD Officer, D. Smith, approached on his vehicle. At that time, Harrison hit the gas pedal and attempted to run over Officer Smith. 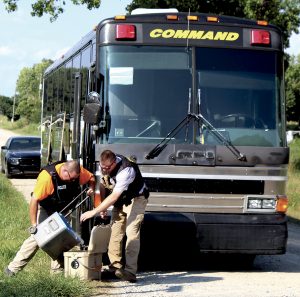 Local law enforcement officers Stephen White (left) and Matt Roebuck transfer ice from one cooler to another in front of the Bertie County Mobile Operations bus. Under hot and muggy conditions on Saturday, officers from across the region responded to help the Bertie County Sheriff’s Office and Windsor Police search for a Martin County criminal who was found and arrested on Monday. Staff Photo by Gene Motley

A vehicle pursuit started from that location and continued through the county, according to Sheriff Holley. Harrison wrecked a stolen Toyota Tacoma truck in a block of woods off of Godwin Road owned by Weyerhaeuser Paper Company and then fled on foot.