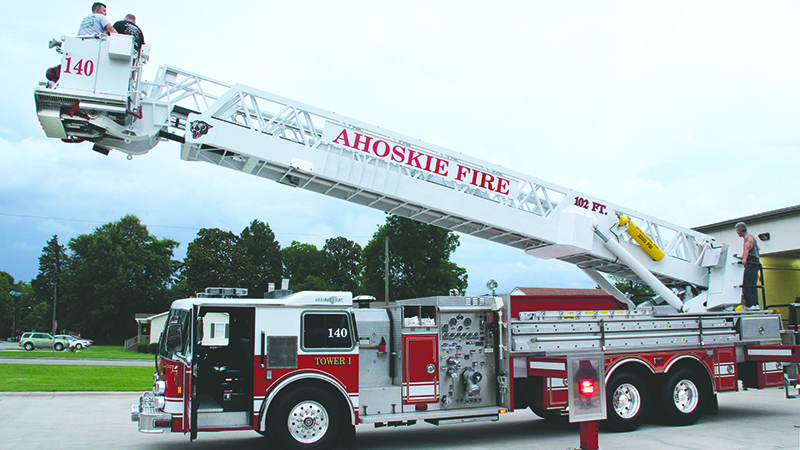 The Ahoskie Fire Department’s latest addition to its arsenal of equipment sits in the parking lot of Station 1. The 102-foot platform truck was purchased second-hand from the Zebulon Fire Department. Staff Photo by Cal Bryant

AHOSKIE – What has a 102-foot wingspan and saves lives and property?

The town recently purchased a 1987 Grumman platform aerial truck from the Zebulon Fire Department for $78,000. A 2019 model of the same exact fire truck is priced at $1.4 million.

“I know the year model isn’t new, but this truck is in immaculate condition….the guys over in Zebulon took great care of this truck,” said Ahoskie Fire Chief Mike Bradley. “We got a heck’va deal.”

Bradley added that the interior workings of the aerial unit, to include all hydraulics, were refurbished in 2010.

“They (Zebulon) spent $300,000 on upgrades,” he said. “Myself and a couple of our firemen went there and checked it out; talked to the Zebulon guys before I came back to our Town Council with a recommendation to buy it.”

The Ahoskie Fire Chief said the newest addition to the town’s fire-fighting arsenal will serve the department and local citizens very well.

“With the platform, it’s a lot safer for our firemen and in those cases where we have to use it for rescue purposes of those requiring assistance,” Bradley stressed.

From an ISO rating (given to each fire department by the state), the truck will also prove beneficial. Those ratings help determine the cost of homeowners and business owners insurance.

“We have our next ISO rating coming up next year; we’ll get the same credit for that truck as we would for a brand new one,” Bradley noted.

The new addition also comes with a 1,500 gallon per minute pump. Adding it to the town’s existing number of fire vehicles, the AFD now has an aerial unit along with three engines and a heavy rescue unit.

“We can spray a lot of water from the ground, but an aerial unit let’s us literally get on top of a fire,” Bradley observed. “Sure, it’s obvious we do not have a lot of high-rise structures here in our town or our area, but when you have a large, single-story building, say like the Super WalMart, and there’s a fire with the hot spot in the middle, you have to get on top of it to put it out.”

He added that the aerial truck will be helpful in rescues, to include water-related mishaps.

“In our training sessions we’ve watched videos where an aerial truck was used to rescue motorists stranded on the road due to flooding,” Bradley remarked.

“Plus there’s an added safety element for us,” he continued, “when we have to access rooftops to ventilate a fire. We can do it from the platform without having to step foot on a roof.”

Due to the fact that all Ahoskie firemen (paid and volunteers) received training over the years with the Ahoskie Rural Department’s ladder truck, they can apply those same skills to the AFD’s aerial unit.

“The basics are the same; it’s a state certification that you’ve trained on an aerial,” Bradley said.

Adding in the five units assigned with Ahoskie Rural, there are now 10 pieces of vital fire-fighting equipment to serve both the town and its outlying areas.

“With our full auto-mutual aid agreement with the rural department, we have all 10 trucks we can use in town and out. Just like the police department, we’re here to protect and serve our citizens. With this newest addition, we can do that job in a better and safer fashion. It’s a win-win for everybody,” Bradley concluded.

Suspect on the run in Bertie County