Mrs. Hofler was born in Gates County on October 5, 1926, and was the daughter of the late Bedford Horton Brown, Sr. and Marietta Spivey Brown. A graduate of Sunbury High School, she was the last surviving member of the Class of 1943. After high school, she attended the Johnson School of Shorthand, a trade she used throughout her working life. A legal secretary, she retired from the Godwin & Godwin Law Firm in Gatesville after 42 years of employment, and served for over 50 years as the Clerk to the Town Board of Gatesville until her death. 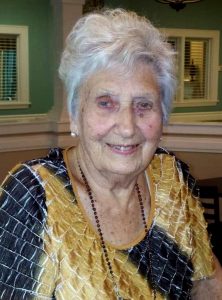 A lifelong member of Beulah Baptist Church, she was a faithful part of its Berean Bible Class, had served as President of the VFW Ladies Auxiliary, was an Emergency Medical Technician serving as Secretary of the Gates County Rescue Squad, and was a member of the former Gatesville Chapter #302, The Order of The Eastern Star, where she had served as Worthy Matron. Lois loved her community and its people, never meeting a stranger, and seeing value and worth in everyone.

In addition to parents, she was preceded in death by her husband, Cooper Hofler; sisters, Marjorie Hobbs and Peggy Byrd; brother, Bedford H. Brown, Jr.; and sons-in-law, William A. Thomas and Stuart G. Windley.

Funeral services will be held Monday, July 8 at 2:00 p.m. in Beulah Baptist Church and will be conducted by her pastor, The Rev. Tom Hall. A private burial will follow in Damascus Christian Church Cemetery.

Friends may join the family Sunday from 4 to 6 p.m. in Miller Funeral Home, 304 Main Street, Gatesville, or in the fellowship hall of the church immediately following the service on Monday.