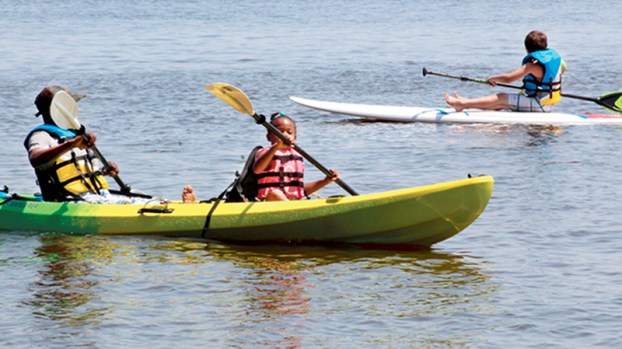 A father and son paddle their kayak during Bertie Beach Day. Staff Photo by Gene Motley

MERRY HILL – It may one day have a name like ‘Inner Banks Bertie’, or ‘Albemarle Bluffs’, or ‘Many Waters’, but for now it’s still TGOW (Tall Glass of Water), or maybe just Bertie Beach.

Whatever the name, they made the venue’s “coming-out party” one to remember. 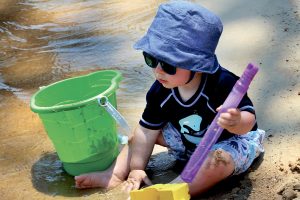 A young beachgoer plays in the sand, one of nearly 1,000 people that took part in the grand opening of the county’s new recreation park on Saturday. Staff Photo by Gene Motley

More than 900 people, by the county’s estimate, turned out at the confluence of the Chowan River and the Albemarle Sound off Bal Gra Road near Merry Hill for “Bertie Beach Day”. The event served as the designated open-house for the county’s new public recreation park on the 137-acre tract purchased several years ago.

“This is a beginning, better than we expected,” said Bertie Commissioner Ron Wesson – one of the many county officials walking about or splashing in the cooling river water. “It belongs to the citizens of Bertie County and it can be whatever we want it to be.”

The idea for the showcase came together quickly. First, as a discussion during a Commissioner’s work session, then more input was added, and a date was selected. Accoutrements such as kayaking, fishing, a rock wall, and swimming became part of the mix, and it was topped off with a catered free lunch of fried fish and hot dogs’ courtesy of the local Abram’s Restaurant.

“We had a lot of good partners,” Wesson added.

Despite the late notice, the county launched a media advertising blitz along with word-of-mouth.

“We wanted to tell people, this is yours, this is what we did for you because we wanted everyone to have a place to go,” said Commissioner Tammy Lee, as she applied sunscreen against the fierce June sun rays. “It’s wonderful to watch the children play in the water. I think today marks the beginning of something very special for Bertie County.”

One of the participating partners, Kitty Hawk Surf Co. from Nags Head in Dare County, brought along kayaks, paddleboards, and canoes, along with several instructors, and some of everything in between. Youngsters taking to the water needed parental permission, and some families went in tandem.

The nearby Midway-Merry Hill Volunteer Fire Department handled traffic, as visitors navigated a tight one-lane road down to the beach site. Bertie County Emergency Management and the Sheriff’s Department – with help from county worker volunteers – handled safety and security.

“We met a few times back here on site and each person had a different goal and a different purpose and we got it all done,” said Sheriff’s Office Chief Deputy Kenny Perry. “It was kind of short notice, but with great weather and a good crowd it turned out well.”

“This is even better, because people are actually staying,” said Bertie County Manager Scott Sauer. “We thought they’d just come for the food, but folks brought their chairs.”

Sauer said the hope was that people would reach out to their Commissioners and let them know how they felt. Most of the reaction was positive.

Richard and Beth Jones, along with infant daughter Allison, splashing in the surf, came from Windsor, and gave the beach good reviews.

“It’s nice for the community and the county, and I think it’s going to be awesome for everyone to enjoy,” Beth Jones noted.

“I think it’s great for the kids, and now with this property the kids have a chance to come down and interact outdoors, so I commend the county for it,” Richard Jones echoed.

“We knew we wanted the citizens to see what we have to offer right here at home without having to travel so far,” said Commissioner Ernestine Bazemore. “The citizens appear happy, which means I’m happy because we’re here to serve the citizens.”

“It was a long trek to get back here,” said Powellsville’s Willie Outlaw. “But once I got back here everything looked good. This is a very good investment; and once they get things like they want it, it’s going to be very nice.”

“I didn’t know they were even considering this,” said Angela Butler from Aulander, watching her children rowing in the paddleboats. “For people who enjoy the beach and beach events, they don’t have to travel, it’s right here in their own back yard. For a children and family event, it was definitely worthwhile. I just want them to keep it clean – take care of it.”

Rolanda Sanderlin from Merry Hill said her family had been to beaches at both Lake Murray and Myrtle Beach in South Carolina, but not to one right here in their own back yard.

“Only difference is the grills aren’t out,” she joked.

“We’re going to eventually get on the national waterway system,” said Commissioners chair John Trent, with a vision toward the park’s future. “We’ve got scientists helping us develop this, walking and horseback trails; this is a driver for our eco-tourism, grant locations, it all works out perfect.”

“If the people weren’t here today, they’d be somewhere else spending money,” said Bertie Economic Development Director Steve Biggs, whose boat was anchored nearby. “People from other counties are telling me this is the biggest thing to happen to the region, not just the county. They don’t have this in Tyrell, Washington, Martin, or Perquimans; we’re going to bring people here who’ve never been to Bertie County before.”

On Monday at the Commissioners’ July monthly meeting, the Board voted unanimously to let the park remain open for the foreseeable future, daylight hours only (dawn to dusk). Vehicles must remain on the top level, and are not permitted below on the beach strand. There can be no fires, no alcohol, no glass containers, and because there are no lifeguards, swimming is done at one’s own risk. Smoking, pets, loud music, and foul language are not permitted.

AHOSKIE – Age and an ailing back has left J. Eley Newsome relying on the use of a walker to... read more