AHOSKIE – Age and an ailing back has left J. Eley Newsome relying on the use of a walker to navigate life these days. 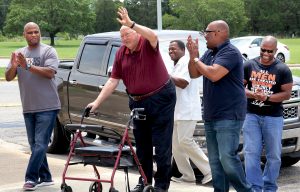 Surrounded by a few of his former students, J. Eley Newsome waves to another group of 1986 Ahoskie High School grads as he makes his way onto the Hertford County High School campus. Staff Photo by Cal Bryant

However, in the eyes of those who loved and respected the former Ahoskie High School principal, Newsome remains in their memories as he was during his tenure at AHS, a six-foot, five-inch, 300-pound administrator who treated each and every student as a member of his family.

The AHS Class of 1986 honored Newsome on June 22 as they gathered for a reunion inside the Hertford County High School cafeteria.

“We just wanted to see him again; he made such an impact on our lives, not only while we were students here at Ahoskie High School, but in our adult lives as well,” said Veronica Patterson, a 1986 AHS grad who helped organize the reunion.

“All the bad things we see today, the school shootings, violence and drugs on campus, that didn’t happen with Eley Newsome as our principal,” Patterson continued. “We felt safe with him here. He was our daddy and you didn’t mess with us with that giant of a man sitting in our principal’s office. He was a big man with a big heart.”

The occasion featured a memory book prepared by the AHS classmates of 1986, which included “then and now” photos of several graduates that year along with their individual sentiments for a man they called a “gentle giant.”

One by one they came forward and stood beside their former principal and read aloud the words they shared about Newsome.

“You will forever be the big man with the biggest heart,” wrote Alyce Murrell.

“You encouraged and inspired us,” said Andre Rowe. “With a pat on the back or a firm handshake, you would express how proud you were of us. I will always have fond memories of you.”

Brian Wright expressed, “I thank you so much for dedicating so much of your life to help mold ours.”

“I remember your smiles whenever we accomplished goals and your praise of the wins we made. Your job as principal was a reward to so many of us,” wrote Carolyn Chamblee.

“Thank you for your leadership, support, and friendship,” remarked Greg Singleton.

Cheryl Yancey wrote to Newsome, “You treated me as one of your own, and I will cherish my four years that you were my principal.”

“In spite of your busy schedule, you set aside time to interact with us,” Hayes Robbins wrote in the memory book. “You were a positive impact in our lives, making you the best AHS principal ever!”

“Thank you for always being fair, firm, and keeping us on the right track during our tenure at Ahoskie High School,” said Cynthia Moore-Stephens.

James Jenkins wrote, “From coaching me in Little League until now, you’ve been a positive influence in my life. Your honorable character impacted mine and I am grateful for our relationship.”

“Your love for me as a student was undeniable! You will always be my principal,” stated Dorothy Peterson.

“My school memories of you are the best because you never had to scold me for anything,” chucked Ronnie White as he shook the hand of his former principal.

LaGina Simons wrote, “Thank you for inspiring me to be GREAT and for sparking my passion for education.”

“You were a gentle giant who really cared about us and always had our best interest at heart,” stressed Scott Privott.

“Thank you for being the rock of the fabulous Ahoskie High School and for always providing us with opportunities to excel,” said Mary Valentine.

Robita Baker shared her memories of Newsome by writing, “You were fair and honest, the epitome of finesse. My favorite principal above all the rest. I am so honored and blessed to celebrate you!”

“Your caring attitude helped me to see the importance of helping young people because they are the future,” remarked Zollie Ford.

Teikeshia Melton said that Newsome was a “builder of character, booster of confidence, encourager of creativity, and instiller of knowledge.”

Melton added, “You touched our hearts and changed our lives forever.”

Patterson referenced her former principal’s stature, saying, “because of your presence I always felt safe at school.”

“We were so fortunate to have your guidance throughout our journey at AHS. Thank you for your kindness and support,” said Wanda Moore.

Fletcher Jones wrote, “I really appreciate everything you did for me and I will always remember my four years at AHS. Wish you all the best!”

“You were so kind, strong, and firm that I implemented your principles with my three children,” stressed Shawn Everett. “Against you, there is no match!”

Newsome, age 81 and now living in Jamesville (Martin County), drove himself to the reunion. Upon his arrival, Newsome’s smile was as big as his stature upon being greeted outside by members of the Class of ’86. 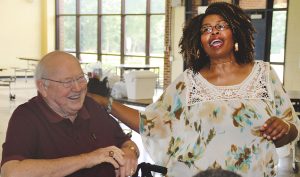 Eley Newsome laughs at a funny story shared by Veronica Patterson, one of the organizers of Ahoskie High Class of 1986 reunion that honored their former principal. Staff Photo by Cal Bryant

“I came here when this school was first built back in the 1972 and was honored to stay here for the duration of my career as a principal (1990),” Newsome said.

Of being able to attend this particular reunion, Newsome remarked, “This is a special occasion, something that old folks like me don’t often get the opportunity to enjoy. It makes me so happy to be here and hear the kind words they shared about me.

“No amount of money I earned during my long career in education can replace the kind and thoughtful words shared here today,” Newsome added. “What’s so important is their words came straight from the heart. It makes me feel so good to know that I made such an impact on their lives.”

Newsome’s sons – Odis (working in Computer Technology at NC State University) and James (employed by the United States Government as a Secret Service Agent and living in Greensboro) – have given him eight grandchildren (4 boys, 4 girls). His wife, Helen, passed away in 2008.

“I’m now just known as Pop Pop,” he laughed just before digging into a “man’s size” meal prepared with love for J. Eley Newsome on his special day.