‘Everyone has a voice’

While Edmonds began her brief tenure in Bertie in February 2018, it should be noted that her predecessor, Dr. Steven Hill, left the same Bertie post after serving only nine months.

A recent press release touts what Edmonds considers her accomplishments during her brief time in the post. 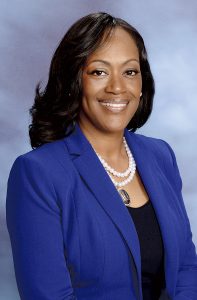 Bertie County Schools superintendent Dr. Catherine Edmonds leaves for a similar post with Elizabeth City-Pasquotank Public Schools at the end of this week. Before leaving, she granted a final interview to reflect on her time in office. Contributed Photo

“During her tenure, the Student Government Association was reinstated; the first-ever Junior School Board Members and Junior County Commissioners were sworn in; and Bertie County Schools was awarded the Advanced Teaching Roles grant from (the N.C. Department of Public Instruction), which is named ‘Bertie THRIVEs,’” the press release states.

“Bertie THRIVEs will be a game changer for Bertie County Schools,” Edmonds maintains. “I feel it will lead to improved teacher recruitment, development and retention, as well as develop and extend the reach of our most highly effective teacher leaders.

“We were one of just four (school) districts that received this grant from the State Department. We had 30 people show up for our first interest meeting. This is just part of the way business is done in Bertie, because it’s not coming from the Central Office, but rather the culture that is in the schools,” she says.

“There are things that are happening in our schools such that regardless of who sits in this seat, our (administrators) should be able to lead their schools,” she said.

“How do we dig deep enough and work with individual students to know that we are addressing the right issues,” she stated. “It’s a way of thinking and processing issues; it’s supposed to drive what happens in your schools.”

Edmonds also cites her “Listening Tours”, where she engaged with local businesses, parents, and students in one-on-one sessions to get a feel for how all they all, as ‘stakeholders’, can support the improvement of Bertie County Schools.

“The information I received from the community, from the students, teachers, and principals, (that’s) what drove the improvement,” she insists. “The majority of it came from hearing students articulate what they felt about their learning experience, and what they needed more of.”

She also instituted ‘Club Day’, where elementary, middle, and high school students explored areas of their particular interests such as FFA, Science Club, Art, Chess and BETA; while other clubs included Relay for Life, Cooking Club, Dance, Women’s Empowerment and even a Fishing Club.

“Everything that we’ve done has come from listening to our students to learn what are the issues and concerns you have, and ask them to think about the solutions,” she noted. “And they would come back and say, ‘She actually listens to us.’ That lets students know they have a voice and that they matter; that’s important.”

For students, particularly of pre-school age, that aren’t in day care but would eventually be coming to school, she came up with ‘Kinder Camp’.

“We started with one week, and this year it’s going to be two weeks, and our goal was to eventually have it for a month,” she explained. “Each year we would add a week for kids who don’t go to Pre-K and are not in regulated care, but we know are going to be in kindergarten.”

“Now they partner with The Good Shepard Food Pantry,” she revealed. “And they are helping with the Farmer’s Market. It’s all about helping our students to understand their purpose in the community, and how to engage, and to give back.”

Even though she’s leaving, she would like for there to be a Bertie Schools student on the local United Way board.

“They’re the next generation, and they need to see the democratic process in play,” she acknowledged. “If they have a voice, then they may want to do that when they grow up; but if you don’t know it exists then how will you know it’s there in an environment that’s not stressful for them.”

In the little time Edmonds had before departing for her next assignment, she reflected on what remains to be done.

“We’re working on professional development, convocation, Community Day, so the transition sets my successor up for success,” she said. “We don’t want to get ahead, because there are some decisions (Dr. Otis Smallwood, the incoming Superintendent of Bertie County Schools) will want to make.”

Bertie County Schools made strides with the most recent North Carolina Accountability reporting for public schools under Edmonds’ short-lived tenancy. Not a single Bertie County school scored an “F” on what is basically the schools’ “report card.” Bertie High School and Bertie Middle School did, however, receive “D” grades for 2017-18.

In addition to her new duties, Governor Roy Cooper has appointed Edmonds to the Board of Trustees for the North Carolina Center for the Advancement of Teaching (NCCAT), begun on May 15 for a 17-month term.

“I am thrilled to be appointed to serve on this board, and I appreciate Governor Cooper granting me the honor,” Edmonds said. “I will work very hard in collaboration with fellow board members to ensure that resources and opportunities are available to support education professionals across the state. Professional development for educators is paramount to ensuring success for all students, in every classroom.”

As she peers around her spacious office, Edmonds notes that she hasn’t taken down many of her mementos or keepsakes.

“I’ll miss the relationships,” she said. “I really do think we’re in a better place than where we were before I came. This is a school community where I want everyone to feel like they have a voice and has value; I don’t have any disappointments or regrets. This has been like family.

“There’s still a lot to do,” she declared wistfully. “We’re here for children. We have to first make sure their needs are being met.”