RICHMOND, VA – Vernon Lee Collier, 97, passed away on June 25, 2019 at Williamsburg Landing in Williamsburg, VA, where he had resided for the past year. Prior to this, he was a resident of Richmond, VA where he lived with his family for 60 years.

Vernon was preceded in death by his parents, Joseph L. Collier and Lillian M. Graves Collier; and the “love of his life”, Genevieve M. Collier, to whom he was married for 75 years prior to her death in February, 2018. 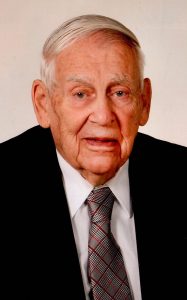 Born in Severn, NC, Vernon grew up with a love for and an interest in farming and gardening. He attended NC State University for two years.

In 1942, Vernon began his career with the Seaboard Coast Line Railroad and the Atlantic Coast Line, which later became CSX. Starting as a fireman working on steam engine trains, and later becoming an engineer, Vernon traveled the rails driving freight trains, mainly from Raleigh, NC to Richmond, VA. However, he also had many opportunities to drive the Tropicana “juice” train, passenger trains, the auto trains, and the “circus” trains. He retired in May 1983 after 41 years.

Even though Vernon was employed on the railroad, he spent his spare time developing and improving his skills as a carpenter, electrician, and plumber. Vernon was a “jack of all trades,” always ready and willing to help others. During this time, he also became a master at woodworking, upholstering, and building clocks. He always had a love for working in his garden and flowerbeds.

Vernon was a lifelong member of Trinity United Methodist Church in Richmond, Virginia, and was a member of the Boykins Masonic Lodge 287 in Boykins, VA for 63 years.

The family extends their heartfelt love and sincere appreciation to the staff members, the nurses, and the CNAs at the Health and Rehabilitation Center at Williamsburg Landing.