JACKSON – A new face will be sitting at the helm of Northampton County in a few weeks. 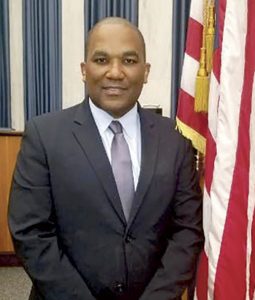 By unanimous vote, the Board of Commissioners selected a new County Manager here at a special called meeting on Monday, June 24. Charles M. Jackson, a native of Whiteville, NC, will step into the role on July 15, taking over for Interim County Manager Robert Murphy.

Murphy was appointed to the interim position in February after the resignation of former manager Kimberly Turner. His contract stipulated that he would only hold the position until the end of June, and then he would resume his retirement.

“I fully enjoyed my time here,” Murphy said after Monday’s meeting, noting he had met many great people in Northampton County during his tenure.

Murphy has agreed to assist for a few weeks as Jackson transitions into his new role.

Jackson’s current job in Richmond, VA prevented him from being present when the commissioners made their announcement, but Commissioner Geneva Faulkner shared a message from him saying “he truly appreciates the opportunity to serve in Northampton.”

Jackson is a graduate of UNC-Charlotte with a degree in Public Administration. During his career, he has worked with the State of North Carolina Government, the City of Raleigh, and most recently, with the Richmond City Council.

According to a press release, Jackson’s work with the Richmond City Council is as a fiscal and policy advisor. His main duties include coordinating the development of the city’s budgets and analyzing proposed legislation affecting local taxes, fiscal policies, and more. During his time there, he also designed the policy framework for Richmond’s performance-based budgeting system as well as addressed the city’s growth needs through affordable housing, economic development, zoning, and local tax policies.

Much of Jackson’s years of public service has been focused on fiscal policy, operations management, and program evaluation.

Jackson is also an active member of the International City/County Management Association (ICMA), Government Finance Officers Association (GFOA), and the American Public Works Association (APWA). He participates in several civic and community organizations, and he said he enjoys reading, exercise, and traveling.

The Board of Commissioners interviewed over 30 candidates for the open County Manager position, but Jackson’s experience, particularly in finance, is what caught their attention.

“He has a lot of experience in government, exactly what we thought we’d need at this time,” said Board Chair Charles Tyner. “He is the one who brings to the table the kinds of things we need in Northampton County.”

With a full-time County Manager in place again, the commissioners said their goal moving forward would be on continuing with their strategic plan.

The strategic plan, which was unveiled by the commissioners on April 1, is a list of goals the Board intends to carry out through 2023. Among other things, it includes expanding the county’s water system, developing more recreation opportunities across the county, updating the planning and zoning ordinances, and pursuing more economic development projects.

“We firmly believe that he will work with us to make sure that our strategic plan is carried out,” said Commissioner Nicole Boone.

Jackson plans to be in attendance for the commissioners’ regular meeting on Monday, July 1 to introduce himself to the public.