AHOSKIE – An Ahoskie man wanted in connection with a May 4 murder has surrendered.

Nysere Tylique Ezell, age 18, voluntarily turned himself in on Tuesday night at the Hertford County Sheriff’s Office. There he was formally served with an arrest warrant issued by the Ahoskie Police Department on the charge of second degree murder.

Ezell was jailed under a $300,000 secured bond. He is scheduled to make his first court appearance on June 25. 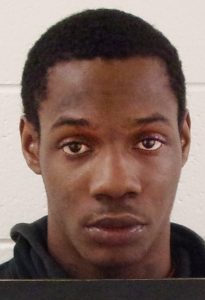 He stands accused of killing his 21-year-old girlfriend, Briana Monea Taylor. Ahoskie Police Chief Troy Fitzhugh said that according to the victim’s family, Ezell was the father of Taylor’s child.

The motive of the shooting and the exact location of where the fatal shot was fired remain under investigation, Fitzhugh said. He did say the investigation showed that Taylor was shot once with a handgun.

It’s also known that a call placed to the Ahoskie Police shortly after 10 a.m. on May 4 referenced a female lying on Lincoln Road, in the area of the VIP Club. Information was also shared regarding a blue vehicle seen leaving that area at a high rate of speed.

At that time, Fitzhugh said APD Officer Tyler Burden, while responding to Lincoln Road, met a vehicle matching that description heading into Ahoskie. He turned around to give pursuit, but the vehicle did not stop before wrecking at the intersection of Academy and Sunset streets. The vehicle came to rest on the Vidant Roanoke-Chowan Hospital property.

According to Fitzhugh, Burden approached the vehicle, which was occupied by a male driver, later identified as Ezell, and a female in the back seat (later identified as Taylor) who was suffering from a gunshot wound. EMS was summoned and the shooting victim was taken to Vidant RCH where she died.