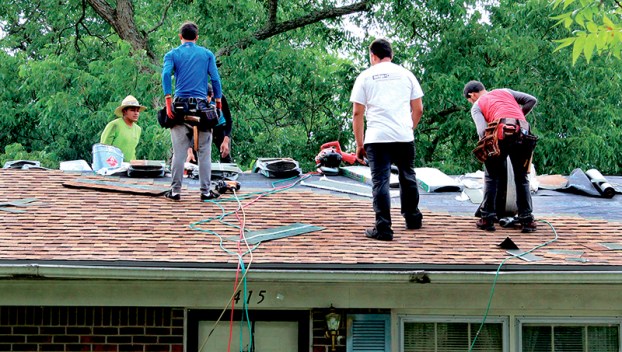 Workers with All Phases Contracting Solutions are shown replacing the hail damaged roof on the home of Judy Potter of Murfreesboro. Staff Photo by Holly Taylor

MURFREESBORO – When hail the size of softballs and baseballs started falling from the sky, Judy Potter was watching through the window of her house and wondering what she was going to do.

“It sounded like my roof was just crashing,” she said, recalling the intense hail storm which passed through Murfreesboro on May 31 and left widespread damage in its wake. “I’ve never seen hail like that before in my life. It was terrible.”

Potter, an elderly resident of Spring Avenue, has low income and had no insurance which would cover fixing a damaged roof. She said it would have been impossible for her to pay to completely replace it. 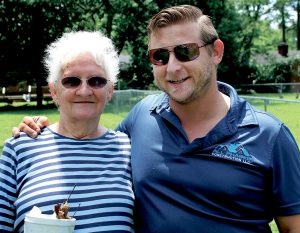 Thanks to the generosity of company owner Joel Roberts (right), Judy Potter had her roof fixed for free despite not having insurance. Staff Photo by Holly Taylor

That’s when All Phases Contracting Solutions stepped in. The small company, which is based out of Virginia Beach, travels to places hit hard by strong storms to repair all kinds of wind and hail damage. Joel Roberts, owner of the company, along with his coworker David Coleman said Potter’s house happened to be the first place they stopped when they arrived in Murfreesboro.

“You can see from the street the black marks from where the hail hit,” Coleman said.

After a hail storm hits like the one last month, Coleman said most people think automatically about damage done to their cars. But roofs often sustain the brunt of the damage even if the homeowner can’t see it.

When the two surveyed Potter’s roof, they found substantial damage all over, including holes in the shingles which exposed the plywood underneath. If another rainstorm passed through, the water would easily leak through to the inside.

“When hail hits, it’s going through two if not three [shingle] layers, or right through it to the plywood,” Roberts added. “How much wind does it take to keep a softball in the air? A lot. These hailstones came down at 102 miles an hour.”

When Roberts found out Potter didn’t have insurance to pay for the extensive amount of repair work needed, he decided they would simply do the work for free.

“I’m just so thankful for them stopping by here that day,” Potter said about their act of kindness. “It’s a dream come true.”

She believed God put them in her life to be able to help her.

“Nothing is impossible with God. I had no idea He’d bless me with a roof,” Potter explained.

Roberts and Coleman brought a crew out to Potter’s house on Thursday, June 13. They worked nonstop for about four hours, completely replacing the entire roof with new materials. The puncture holes from the hailstones were just a memory after they were done with the work.

Potter was ecstatic as she watched the work progress, knowing that thanks to an act of kindness, she could sleep in her house without worrying about rain leaking through.

“This is truly a miracle to me,” she remarked.