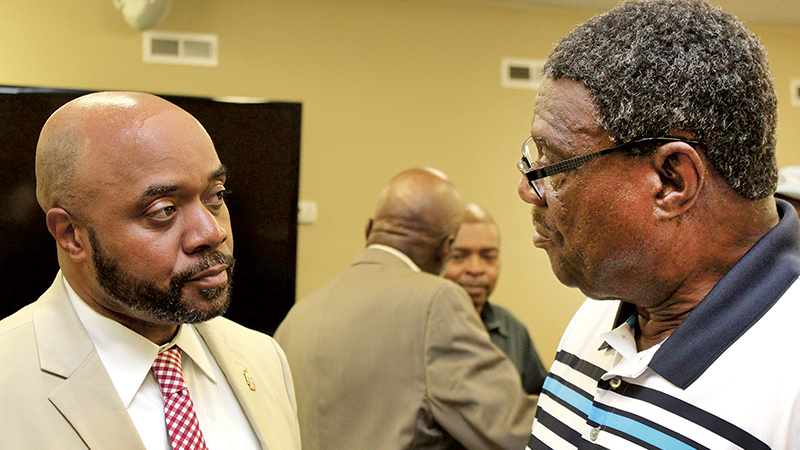 WINDSOR – By a unanimous vote on Friday, the Bertie County Board of Education approved Dr. Otis Smallwood as the school district’s next superintendent.

The announcement was made at the Bertie County Schools’ Central Offices, site of the former Bertie High, which is where Smallwood’s career in education began in 1993.

Smallwood, a native of Indian Woods in western Bertie, succeeds Dr. Catherine Edmonds who is leaving for a similar post with Elizabeth City-Pasquotank County Schools at the end of this month.

In addition to being native born of the county, Smallwood is a 1989 graduate of Bertie High School and he later attended Elizabeth City State and East Carolina before acquiring his doctorate from Nova Southeastern University.

“I’m just more than excited and it’s just very humbling, and an honor that I was selected to come back,” Smallwood said at his introduction, with beaming members of his family in attendance. “I look forward to doing the things that will help our children to excel.”

The North Carolina School Board Association assisted the Bertie Board of Education (BOE) in their superintendent search prior to Edmonds’ hiring 18 months ago; but that search came at a cost of roughly $25,000.

“In an effort to conserve funding this time, we (school board) held a special called meeting June 5 and interviewed our three finalists,” said BOE chair Tarsha Dudley. “That was all part of our final process.

“Dr. Smallwood is a veteran educator with 26 years of experience. He has proven himself an effective leader in every area that he has served in public education: bus driver, teacher, assistant principal, director, and for the past several years as an assistant superintendent,” Dudley continued. “The leadership skills that he has developed over the years make him more than qualified to be an effective superintendent.”

Smallwood began his career in education administration in Bertie County where he worked in Human Resources as Director of Information Technology for the district from 2000-2008. He has spent the past 11 years as Assistant Superintendent of Jones County Public Schools in charge of Human Resources.

Through his work with the Jones County State Employees Credit Union, Smallwood helped a family ravaged by Hurricane Florence in 2018 receive a new home through Habitat for Humanity; even being on hand to present the keys to the Hill family for their new dwelling when they moved in earlier in the spring.

“Little did I know when I walked into this building in ’93 as a high school algebra teacher – right around the corner from where we are standing – that 26 years later I would be standing here as the next superintendent; but God orders my steps,” Smallwood said. “This day has been a long time coming.”

At the announcement, Smallwood, sometime becoming emotional with his voice cracking, often made reference to his teachers from West Bertie Elementary right on through to his high school days – some of whom were in the audience.

“I want to thank (them all) for pushing me as a student,” he acknowledged. “I learned so much discipline from watching them. I look forward to meeting and re-acquainting myself with all the wonderful people of this district.”

“I think you are bringing a lot of that dignity back here to us,” said current BOE vice-chair Norman Cherry, another of Smallwood’s early mentors.

Smallwood then greeted over 50 well-wishers and staffers in a long receiving line before taking time to make several comments to the media.

On the subject of broadband expansion in the county:

“It’s been a challenge to get it everywhere, but that’s one of the things we need to get together with the County Commissioners and work on to try to work (on infrastructure), so we can get it all over the county.”

“It’s sad that we have to focus on so much of that in this day and time, but it’s just one of the things we have to do. We have to have a strong partnership with our Sheriff’s Office, and we have to teach our kids to be pro-active in reporting things that look suspicious, and try to stay ahead of the game in keeping our kids safe.”

Smallwood’s one of his priorities will also be teacher retention – with incentive programs like Bertie-THRIVE, which assists teacher advancement away from the classroom, in addition to aiding in recruitment and development.

“There’s been a lot of (teacher) turnover here in Bertie County,” he noted. “One of the tenants of a strong academic institution is leadership and relationships. That’s which I’m going to work on; establishing some strong relationships across the county and hope it affects all parts of the puzzle in a positive way. That’s what I’ll be working on: trying to bring some stability and strengthening relationships.”

Smallwood, who received a four-year contract, will begin on July 22. In the meantime he will go through a brief transition period with Edmonds. 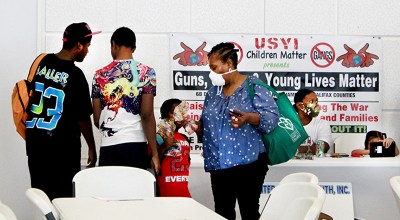