AHOSKIE – Fifty-two years ago, U.S. Army Major Wallace White stood on the stage of C.S. Brown High School in Winton, unsure of what he wanted to do next. He had no particular mission in mind, other than to make sure that he lived up to his parents’ expectations, which were to graduate from high school and attend college. To fulfill this goal, White went on to North Carolina Agricultural and Technical State University to study Business Administration.

During this time, it was mandatory for all males to be a part of the Army or the Air Force program of ROTC at NCA&T. Without much resistance, White was assigned to and enrolled in the Army program. These programs became voluntary at NCA&T his junior year, but White decided to stay. 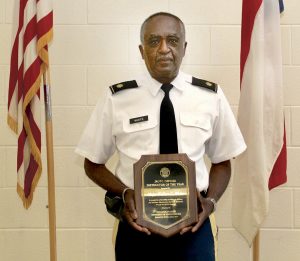 U.S. Army Major Wallace White, the founder and lead instructor of the JROTC program at Hertford County High School, was recognized last week as the 2019 Junior ROTC Instructor of the Year at the American Legion Department of North Carolina’s 2019 Convention in Raleigh. Photo by Jazmine Bunch

“One of the things I knew, at that point, that I wanted to do was to jump out of an airplane,” he said. “So I figured that the only way to do that was to remain in the JROTC program and graduate with a commission in the Army.”

This decision led him to an ongoing 47-year career in ROTC and Army.

Last week, White received the 2019 Junior ROTC Instructor of the Year award at the American Legion Department of North Carolina’s 2019 Convention in Raleigh.

White graduated from NCA&T in 1972 and he was commissioned a Second Lieutenant in the US Army.

“I was thinking that after college, I was going to go do something in business,” he said, “but ROTC changed that totally.”

He was trained to be an Infantry Officer in Fort Benning, Georgia, where he graduated from Airborne School. He was assigned several Infantry and Special Forces duties throughout his career, including Fort Polk, Louisiana and Fort Bragg, North Carolina, where he retired in 1992 after deploying to Saudi Arabia in 1990 with the 18th Airborne Corps.

Upon retiring from active duty, he started the JROTC program at Hertford County High School with the help of U.S. Army Sergeant Major (retired) Johnnie Farmer in 1993. White taught at HCHS for 13 years until he moved to Florida in 2006 to teach at Miramar High School for one year. In 2007, he was called back to active duty at Elizabeth City State University as the Assistant Professor of Military Science.

He retired from active duty in 2009 in Elizabeth City, but he returned that year to teach at HCHS as the Senior JROTC instructor, where he currently remains employed.

Serving at HCHS for more than 20 years, White reflected on the differences in teaching in the past and teaching presently.

“If I reflect back to ’93 and looking at now, it’s a little bit more of a challenge,” he said, “because of the way you have to keep students involved and focused on getting an education. There are aids that are out there that we have to use in order to make sure that they get what they need when they leave high school.”

The JROTC program components can range from diet and exercise, to world history and leadership. Like the mission of the program, “to motivate young people to be better citizens,” the curriculum is tailored to prepare students with things they’ll need after high school to prepare them to succeed in life.

Discipline is also a major aspect of the JROTC program. The students have various opportunities that prepare them to lead others, take charge and present themselves to an audience. White enjoys instilling the values he learned growing up into his students, and feels he is rewarded constantly.

“My most valuable moment has been every day,” White said. “Every day that I get an opportunity to teach students, and to try to guide them to do the things they need to do to be successful is a valuable moment.”

He established the annual Roanoke-Chowan Drill competition in 1995, which he continues to host every year. White has organized drill, rifle and raider teams in addition to honor guards and color guards, who present at a variety of community events such as parades, ceremonies and sports games.

He engages his cadets in various forms of community service and continuously exposes them to learning experiences and excursions. Under his direction, HCHS JROTC continues to earn the Gold Star status annually from the Fourth ROTC Brigade, Fort Bragg.

White’s dedication and passion to influence students hasn’t gone unnoticed. He was nominated for the 2019 JROTC Instructor of the Year award by the American Legion Post 102 in Ahoskie. He joined the Post in 1994 and he continues to serve as an active member.

Honored to receive Instructor of the Year, he considers it validation.

White has been an instructor for 26 years, and he continues to strive to teach students all that he can. However, as a teacher, he has learned how important it is for educators to strive always to ensure that students are educated and prepared.

In his lifetime of learning, growing and teaching, White continues to lead students with a guiding belief in mind: Proverbs 22:6.

“’Train your child in the way he or she should go, and when they are grown … they will not depart from it’,” he cited. “It speaks to that, and I believe that.”

White has received this honor on the part of the American Legion Post 102, who felt his recognition was “long overdue.” He continues to serve as an active member of the Post in Ahoskie, teach JROTC at HCHS and involve his students in activities in the community.

No tax hike in Murfreesboro