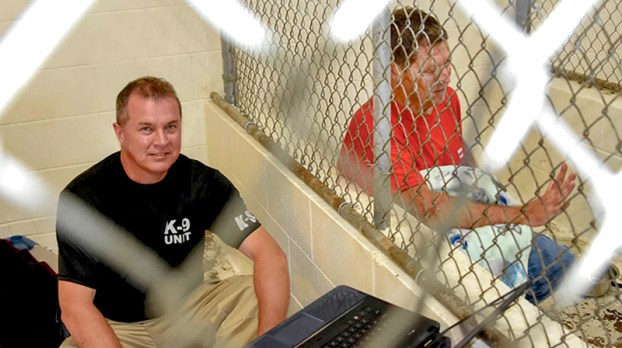 Northampton K9 Officer Kevin Byrum (left) and Northampton Health Director Andy Smith sit in their respective kennels at the county’s Animal Shelter late last week. They kept their promise of an overnight stay after more than $20,000 was received in pledges that will be used for shelter renovations. Photo by Angie Todd

Who let the humans in?

JACKSON – An animal shelter isn’t your typical accommodation for an overnight stay by humans, but Northampton County’s shelter recently had two guests spend an entire night in the dog kennels. 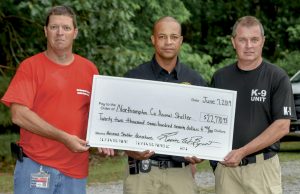 It started back in April when Byrum launched a campaign to raise $20,000 for upgrades to the shelter. If successful, Byrum vowed to spend a night in the kennel, and Smith offered to join him.

By the end of the fundraising period, people donated a total of $22,770.93. Many people from the local community contributed to the fund, but as word spread, Byrum said they also received donations from people all around the country and as far away as Canada and Russia.

“It was just mind-boggling,” Byrum said of the support. “I just want to thank the people for their response to this fundraiser. It’s heartwarming, and it just shows how much people of this community really care about their animals.”

The county’s animal shelter is managed by the Northampton County Health Department but operates on a very limited budget. When Byrum took up the position as the county’s Animal Cruelty Investigator last year, he started to take notice of the shelter’s conditions, which is what inspired him to create the fundraiser.

“We just want to make it a little nicer for them (the animals) when they come in,” Byrum emphasized.

Smith said they had three main areas they wanted to focus on as they make improvements to the space.

“The initial main focus will be to reseal our floors because time and wear and tear really take a toll on those,” he explained.

Their second goal is to add more kennels to allow them to house more animals. Currently the shelter is equipped with eight dog kennels and four for cats.

“We don’t want to have to euthanize any animals because we don’t have space for them,” Byrum added.

Their third goal is to create an outdoor play area for the animals to enjoy.

Smith said the funds might not cover all three of those things yet, but it will definitely help them make a lot of progress.

As for the overnight stay, both men said it was a very positive experience.

“It was really nice. The time went by pretty quick,” Byrum reported. “We stayed busy on the computer chatting with people all over the country all night long.”

Smith echoed the sentiments, saying, “It was fantastic. What I truly enjoyed was interacting with people online and just spending the time with our dogs. Even our ‘furbabies’ seemed to enjoy it. I couldn’t believe how many people logged on and followed.”

The two used Facebook Live to broadcast their stay, answering questions and introducing viewers to the animals currently at the shelter. Two animals were adopted out during the night, including one kitten around 4 a.m.

“That was just awesome that gentleman took the time to come down,” Smith said of the late-night adoption.

“We were talking to people in other countries,” he continued. “People really asked great questions to get good information out.”

The Northampton County Animal Shelter houses animals that are surrendered by county citizens or strays picked up by animal control officers. The animals are then taken to the veterinarian for a clean bill of health. Afterwards, they are kept until good homes are found for them.

“We try to get the puppies and kittens out to rescue groups because we’re really not set up for small animals,” Byrum noted.

The shelter also works to reunite lost pets with their owners when they can.

For people who are interested in continuing to support the animal shelter, Smith said the best thing is to visit the shelter’s Facebook page (Northampton County, NC Animal Shelter) to stay up-to-date.

“We don’t solicit donations, but we sincerely appreciate them,” Smith added.

Byrum also noted that if anyone does want to donate, they can be mailed to the Northampton County Health Department.

“This is just something I wanted to do,” Byrum concluded, grateful of the overwhelming support for the animal shelter. “I can’t thank everyone enough.”