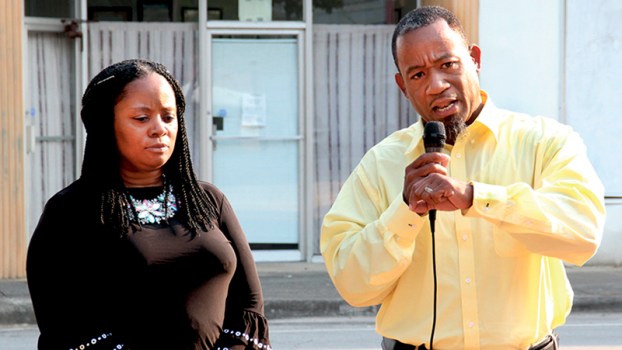 Pastor Derrick Mizelle of Restoration of Hope Worship Temple of God in Murfreesboro was among those addressing a gathering of local citizens last Sunday during a rally in Ahoskie over the recent cases of gun violence. Staff Photo by Cal Bryant

Taking back the streets

AHOSKIE – Shwanda Williams readily admits she has her hands full.

As the mother of five sons, two of which she says are typically troublesome, it’s a struggle to keep her children on a straight and narrow path.

“I’ve raised them using Biblical principals, but they’ve strayed away,” Williams said. “I’m trying my best to keep them out of the streets; it seems like every time they get mad at someone, all they talk about is killing someone.

I’m trying to prevent them from committing a crime.”

Like many in her hometown of Ahoskie, Williams is horrified at the news of another murder locally. There have been two in Ahoskie, both young people, since March 31. 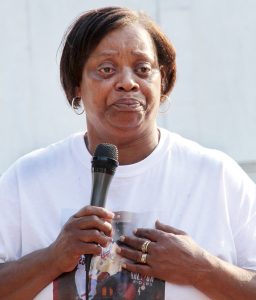 Jeanette Taylor spoke from the heart, sharing the tragic stories of the murders of her son and nephew. Staff Photo by Cal Bryant

“We are pleading for help; everyone wants to blame the parents, but please tell us what we’re doing wrong and we’ll try to fix it,” Williams stressed. “I don’t want to put my boys out of the house; I’m showing them love, but they need discipline. One of my biggest problems with my boys is they don’t want to share anything with me.”

Williams has formed the group MOMS (Molding Our Male Seeds). On June 9, MOMS invited the community to share their concerns over gun violence during an event held at No Man’s Land Park in downtown Ahoskie.

There, local resident Jeanette Taylor choked back the tears as she shared what her life has been like since her son was murdered in 2003 at the VIP Club. She also lost a nephew in 2002 during a shooting in the parking lot of the now closed Golden Corral in Ahoskie.

“My son had a six-month-old baby when he was killed, and his girlfriend was pregnant with their second child. I now have two teenage grandsons that grew up never knowing their father,” Taylor said. “So, when you’re out here on the streets killing one another, you don’t only take a life, you hurt the victim’s family and your own family.

“My pain has never gone away,” Taylor continued. “I live with that pain every day. And now there are other families grieving with all this (recent) gun violence in Ahoskie.”

She encouraged the parents of today to keep up with the whereabouts of their children as well as with whom they associate.

“Don’t let them hang out with the wrong crowd; they will steer your children the wrong way,” Taylor stressed. “Take control of your children and do it when they’re young.”

Pastor Derrick Mizelle of Restoration of Hope Worship Temple of God in Murfreesboro shared that he was once a troubled young man before finding his way in life.

“If I can make it off the streets, then anybody can,” he shouted above the roar of traffic along Main Street. “The Devil has taken over and he’s cutting out a generation of our young people. They have fallen into a situation where they feel they have to prove themselves to somebody. The only one you need to prove yourself to is yourself.”

He added that violence in the streets not only affects those close to the situation, but it shakes the entire community as a whole.

Mizelle encouraged those following the wrong path to reach out for help.

“I’m pretty sure there are many people in your life that will talk with you and try to set you on the right path,” he stated. “I’ve been there; I was a part of the street for over 15 years. I made it out by seeking help. Don’t let the street conquer you, you conquer the street.”

Glenn Powell also admitted he once roamed the streets as a troublemaker. However he paid the price, serving time in jail for his crimes.

“I can provide all the material things for my child, but my job as a parent isn’t what I put on them, but rather what I put in them,” Powell continued. “All of Ahoskie needs to stand together on a united front if we want to take our town back from these gangs and these thugs.”

He stressed that no parent should stand by a grave and watch their child being lowered into the ground. He shared the following poem to that fact:

“Now that we’re all out here standing around, how can we stop another child from being put in the ground. We are all responsible for every child in this town. It has to start at our house by taking back control in order to stop another child being put in a hole. Who among us out here has felt the pain from losing a kid, but their death can’t be justified no matter what they did. The Bible tells us to raise them in the way they should go; but if we’re not there to guide them, how will they ever know? Some of us are so busy trying to make ends meet that we have little time to keep our children off the street. Let us put our heads together so that a solution can be found before we have to stand and watch another child being put in the ground.” 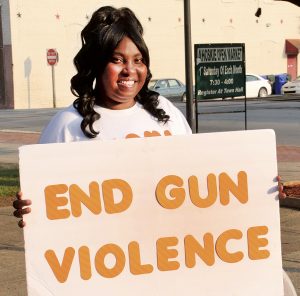 Shwanda Williams has formed the group MOMS in an effort to curb local gun violence. Staff Photo by Cal Bryant

Lamont Bishop, a Deacon at Freedom of Praise Church, said gun violence and murder wasn’t part of everyday life in Ahoskie when he was younger.

“Now that’s all we see; our future, our children are disappearing right in front of our eyes and we’ve got to do something now before it’s too late,” Bishop stressed. “The parents have to take back control of their house. We’ve got to stop being scared of our children and show them some discipline.”

Bishop said it’s not an uncommon sight now to see young teenagers (13-to-14 years old) walking the streets of Ahoskie late at night.

“We need to get our young people in church and put God in their life,” Bishop continued. “The Devil is stealing our children. They’re killing each other because of what color they’re wearing. They’re more concerned about their gangs than they are about themselves.”

Stewart Fields, one of the event’s organizers, said he was pleased to see groups and individuals coming together in an effort to solve this outbreak of local gun violence.

“I can attribute some of this violence to young males who do not have a role model in their lives; they’re being raised in homes without fathers,” Fields observed. “We’ve got to reach out to the children in these situations.”

He stressed that children need to be taught certain values at an early age, and that parents need to continually reinforce those values.

“We need to reach out to these kids in the streets; ask them what they need and ask them how we can help. Until we first do that, then we’re fighting a losing battle,” Fields concluded.

Williams, meanwhile, vows to continue to fight, no matter the odds. She is planning a talent show in the near future.

“That’s a way parents can support their children and hopefully it’s a way they can bond. We want to show them love and encouragement,” Williams said.

By JAZMINE BUNCH RCNH News Intern WINTON – The Hertford County Board of Commissioners accepted a new addition to the... read more