Hail, some as big as baseballs, and high wind caused widespread damage to vehicles, homes, and crops late Friday afternoon. 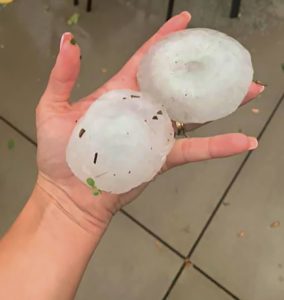 Friday night, another line of thunderstorms produced a lightening strike, igniting a fire that gutted a home along NC 561 between Ahoskie and the St. John community.

The first severe thunderstorm – which sprang to life in northwestern Bertie County near Roxobel – made beeline north, basically along the US 258 corridor. The majority of the vehicle and residential hail damage occurred in and near Murfreesboro. There, the hail was baseball-size, a rare sight locally.

While surveying the storm’s aftermath early Friday evening in Murfreesboro, Smith said he counted well over 100 vehicles damaged by the large hail. That damage was to glass windows and dents in the body of the vehicles.

“And those are the ones I could see; I’m sure there were many more that were damaged that I didn’t see,” he said. “Most of the ones I saw were parked at Chowan (University). There was a dance recital there (in the Columns Building) and there were a lot of vehicles. I feel certain that the local insurance agencies were very busy over the weekend and into the early part of this week.”

“It sounded like someone was throwing baseballs at the side of our house,” she said. “My husband and I were outside briefly and we heard what sounded like a train coming through. That meant a tornado, but it must have been overhead and never touched down.

“It cooled down a lot after the storm passed over; the temperature went from the 80’s to the low 60’s,” she added. “I guess that’s what caused the fog to form…that was quite eerie to see; the ground covered in hail and then the fog.”

Castelloe reported damage to one vehicle (two others were safely parked in the garage), and to her residence, including window screens and the roof.

“All that can be repaired; fortunately there was no one hurt to my knowledge in Murfreesboro,” Castelloe stressed.

Smith said he did not notice any damage at ground level that would lead him to believe a tornado touched down.

“There was a tree across a home in Woodridge Mobile Home Park and another tree downed across a street in Murfreesboro,” he noted. “As to the residential damage caused by the hail, that was to vinyl siding and holes in the roof.”

Smith added that he sent a report to his superiors at the state level, but he didn’t feel that there was enough damage to justify special emergency funding.

The residential fire later on Friday night was to a rental home. There, Smith said it appeared to have been caused by lightening.

“I would need to see some evidence, to include that of those living there or next door if they heard a loud boom, to confirm lightening as the cause,” he stated. “It’s my understanding that the homeowner at not at the residence at the time the fire was reported. Rather, he is a Dominion Energy employee who was called out to restore power in the areas affected by the storm.”

The renter is Cade Quattlebaum. His high school – Ridgecroft, from where he graduated in 2016 – is accepting donations to assist.

According to the school’s Facebook page, “If you would like to make a donation to Cade via check, you can make it payable to Cade and drop it off at Ridgecroft. We will get it to him. Thank you.”

A GoFundMe account is also set up for Quattlebaum. As of Tuesday morning, it had generated $809 of a $3,000 goal.

From an agricultural standpoint, the Roxobel area took the brunt of the storm. Billy Barrow, Director of Bertie County Cooperative Extension, estimated 1,700 to 2,000 acres were affected.

“There was hail damage to cotton, corn, and soybeans; some sage that was ready to harvest was pretty much destroyed,” Barrow told the Roanoke-Chowan News-Herald on Monday. “Some peanut fields also received damage, but they’re not impacted as much as the other crops.

“There is some thought to the fact that the corn can be replanted if it’s in the ground over the next seven-to-10 days,” Barrow added. “The cotton and soybeans can also be replanted. The affected farmers are deciding which way they want to go. Those guys are resilient, they’ll bounce back.”

There was also property damage in western Bertie County, according to Emergency Services Director Mitch Cooper.

“Several homes reported windows busted out and there is an unconfirmed report that a mobile home suffered damage,” Cooper said. “There were reports of hail ranging in size from nickel and dime size to that of golf balls.”

Northampton County Emergency Management Coordinator Ronnie Storey said residents didn’t receive much damage from the storm as it passed over the southern and eastern edge of the county.

“We had a few tree limbs blow out, and a couple of trees blown over in the road. Nothing serious; nobody injured. We had a little bit of hail, but not what they had over there (in Murfreesboro),” he reported.

Storey said parts of the western end of the county received heavy rain, but there were no reports of flooding due to the dryness before the storm.

Farmers in Northampton County also managed to dodge the worst of the storm. Craig Ellison, who serves as the county’s Cooperative Extension Director, said he hadn’t yet received any reports of crop damage from the farmers he had talked to as of Monday, June 3.