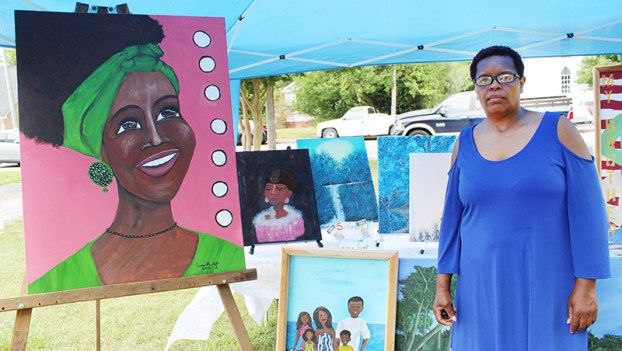 Among those showing their work at the 10th annual “Arts in the Park” event held Saturday in Jackson included Fannie Grant. Staff Photo by Holly Taylor

‘Arts in the Park’

JACKSON – Most art finds itself on display in museums or exhibitions. In Northampton County, however, one annual event brings the art outdoors.

The 10th annual Arts in the Park, sponsored by the Northampton County Cultural Arts Committee, was held in the Courthouse Square in Jackson on Saturday, June 1. Ten different artists—mostly locals but also a few out-of-towners—set up their artwork to display for visitors.

“I really appreciate all the artists coming out today after the storms we had last evening (Friday), especially the ones that had to travel from Petersburg and Roanoke Rapids and Suffolk,” said Judy Collier, chair of the Arts Committee. “It takes a lot of work for the artists to bring their work out here to display.”

Some of the artists are long-time participants in the Arts in the Park event while others are showcasing their work publicly for the first time, Collier explained. She and the rest of the Arts Committee have gathered a list of artists’ names over the years, which continues to grow each time.

Kara New, a resident of Lasker, is one of the artists who joined the event this year. As a student still in school, she’s also the youngest of the group. New’s artwork consists of drawings and sketches of animals and people, often using regular lead pencils and colored pencils to create her intricate designs.

New said she’s liked drawing since she was young, but really started to do it seriously when she turned 13. Now she practices every day, and wouldn’t mind participating in more art shows in the future.

“It just puts your mind at ease and you can use your imagination,” she explained about why she likes creating her art.

Photographer Karen Cole also had her work on display for the first time, showcasing beautiful snapshots of local wildlife and nature.

“What I’ve found out about photography is that it’s basically shoot, shoot, shoot, and eventually you’re going to get that right shot,” explained Cole who has developed her photography hobby for more than a decade.

“If I see an eagle, I can spot it right off the bat,” she continued, noting that the eagles in her photos on display were from nearby Occoneechee Neck.

Johnny Shelton, a retired Army veteran who does sewing machine repairs for a living, has brought his multitude of creations out to the Arts in the Park event every year since the beginning. His display contained a variety of jewelry, pine straw baskets, tiny wooden rocking chairs, decorative items made of pipe cleaners and spoons, and more.

Shelton said some things, like the rocking chairs, take him a whole day to complete. Others are quick work he does with the materials he has on hand. It’s a way, he said, for him to pass the time during the day.

Fannie Grant, a painter, has also participated in the outdoor arts show for several years. She uses acrylic paint on canvas or wood to create images of nature or people, the latter of which she said is her favorite subject to paint.

“I’ve been painting on and off my whole life. I started getting serious about it six, seven years ago, getting back into it,” Grant explained.

Grant is no stranger to showcasing her work at art shows, but she said she enjoys the Arts in the Park event.

“You feel a connection to the community. It’s really nice,” she said.

In addition to the artists set up in the park, there were a few other food and craft vendors and tables for people to check out. Representatives from Northampton’s 4-H program, for example, were on hand to teach people more about chickens, dairy farming, and more.

Sam Rasnic, who is interning for the summer with Northampton’s Cooperative Extension program, said she had fun getting to experience the outdoor art show for the first time.

“It’s a great event where the community can come together and share their talents,” she noted.

The annual event is funded through the North Carolina Arts Council Grassroots Grant. Northampton’s Cultural Arts Committee uses funding from that grant to provide several art-based events throughout the year in the local schools and the community.