From Bear to Bear

“He taught me early on that the first thing is always said be the first to hit,” Davis recounts in a conversation back in February when he signed his National Letter-of-Intent to attend CIAA member Shaw University in the fall.

Davis chose the Bears last winter after receiving an offer from FCS power North Carolina A&T. In Greensboro, he might have been reunited with former adversary Aaron Harris from Elizabeth City Northeastern, who signed with the Aggies; but instead Davis opted to play in Raleigh. His other offers were from Chowan, Virginia State, Fairmont State, and St. Augustine’s.

“Shaw just seemed to be a brotherhood,” Davis said. “They seem to be trying to not only forge a winning program, but also a ‘family program’ as well. That’s what Hertford County (football) was like, and that’s what I wanted my next level to be: like a family; I wanted to feel at home.” 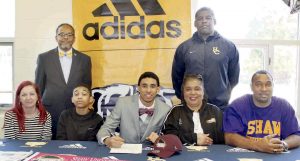 Davis says fellow graduating seniors Orrin Gatling and Michael Savage helped form the same family bond for him with the Bears. That trio helped power the 2018 team to the third round of the NCHSAA 2A playoffs before their season ended at the hands of Thomasville Ledford in a game the Panthers say was their toughest of the season.

By season’s end, Davis had accounted for nine HCHS touchdowns and nearly 1,000 all-purpose yards on a combination of offense, defense, and special teams. On defense he had 21 tackles, a dozen passes-defended, and five interceptions – one of which he returned for a score. On the offensive side from his receiver position he had 17 receptions for 380 yards with six touchdowns through the air. He also scored twice on rushing plays.

“We tried our hardest,” he says wistfully. “I guess it was just something God didn’t mean for us to have.”

Davis hopes his hard work will lead to a professional football career. Interestingly, he has no NFL receivers as idols.

“I see myself as my own motivator in a pro uniform no matter what team I’m on when it comes to offense,” he acknowledged. “On defense, I like (Jacksonville Jaguars) Jalen Ramsey. The way he plays is how I want to play.”

Davis says he’ll try to adjust to the speed of college football, and at 6’ 3”, 170 pounds, he knows he’ll have to grow both vertically and horizontally.

In college, Davis hopes to study Business Administration. He has worked the family business – S&D Tours and Charters in Winton – and wants to take it global when he returns and takes over full-time.

If you get the idea that Davis exudes confidence, that’s a quality assumption.

“It isn’t overachievement,” he said. “It’s just a mindset, a goal. The time is now, not in the future.”

Davis dedicated his football life to his former childhood friend Zachary Sawyer, a youth who tragically died in a freak electrical accident when both were 12U players on the Hertford County Bobcats. As a special gesture, Davis invited Sawyer’s mother, Amber Osborne, to his official signing.

Saxby says Davis was a pleasure to coach; and it’s attitudes like that which made him special.

“Heckuva student, athlete, someone who really works hard,” the coach echoed. “It showed in his play, and he stepped up his game to help us advance. I’m happy to see he’s earned a chance to play at the next level, because it’s one of our goals. He was a big play guy when we needed it in order to win football games.”

“I want to be a leader in college, because they (Shaw) did everything they could to get me there.” Davis insists. “I want to be that guy my team can depend on. I may not have achieved a championship in high school, but I do intend to bring one back somehow.”

Queen of the Caroms