JACKSON – Over 315 people enjoyed the speech by Timothy Newsome, Dallas Cowboys 1980-1989, at Choanoke Area Development Association of NC, Inc. (CADA) celebration of 57 years of service and partnerships on April 25 at the Northampton Cultural Wellness Center in Jackson.

Newsome highlighted how the message of his speech had helped him in high school, in college, as a professional football player, as a successful businessman, and as a person, and how this message is important to our communities today.

“When adversities come in life and they will come, don’t give up, figure it out,” said Newsome as he shared his successful message. 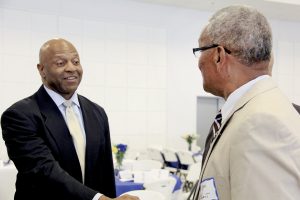 He related how CADA had come together with partners to “figure it out “in the past, and how it was important for communities and partners to come together today to discuss and figure out strategies to impact current local needs.

Newsome was introduced by Tommy Mitchell, former Hertford County coach and educator, who described his former student-athlete’s leadership and achievements at the then Ahoskie High School. Newsome shared with the audience the impact that Mitchell had in his life when he introduced him to the Fellowship of Christian Athletes and arranged for him to attend a state conference. He stated that his life had been changed by that experience.

He also shared several examples of how he had been directed to “figure it out” when challenges presented and that had made the difference in his success. He credited his parents for their support and examples especially reminding him of his options if he did not “figure it out”.

Attendees had an opportunity to meet and greet prior to the banquet.

Servers for the event were Upward Bound students from Chowan University and WIOA Youth from Northampton County. The event caterer was Odessa’s and decorations were by Frieda Wellman. Entertainment was provided by Dr. Nayland Collier and Larry Gaines.

To learn more about CADA’s history, the “Friends of CADA”, sponsors of the event, and opportunities to be involved visit the CADA website at www.nc-cada.org.

AHOSKIE – An exhaustive effort by the Ahoskie Police to find the person responsible for the May 4 murder of... read more