GATESVILLE – When Morgan Legg graduates from Gates County High School on June 7, it will mark her second diploma in less than one month.

You see, Legg is already a college graduate.

How does that work within a public school system without an Early College program? For Legg, it was years of hard work and sacrifice, but the end reward produced a high school diploma at GCHS plus an Associates of Arts Degree from the College of the Albemarle (COA). 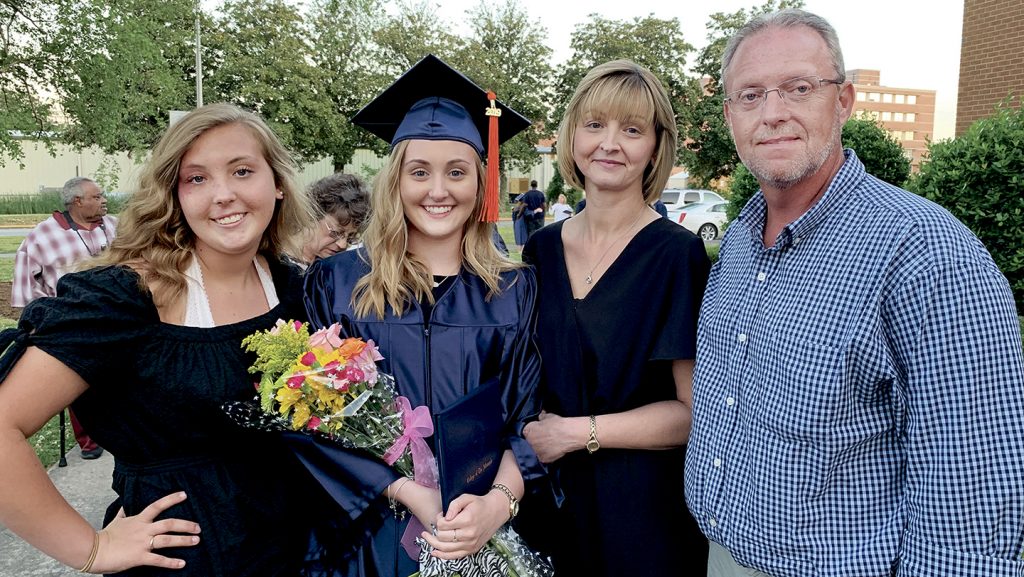 Morgan Legg (second from left) is shown with her family – from left, sister Grace, along with mother and father, Erika and Jeff – following her May 8 graduation from the College of the Albemarle. Contributed Photo

“That’s a first for Gates County High School,” stated Ann Harrell, a GCHS teacher who is also in charge of the dual enrollment program offered through COA.

“Morgan is an extremely motivated, goal oriented person,” Harrell continued. “I’m so proud of her accomplishments; her drive to complete 14 years of education in 12 years. She has set an example for others to follow. Hopefully she’ll be the first of many here at our school to accomplish this feat.”

But as mentioned earlier, the goal was reached thanks to Legg’s grit and determination to succeed, traits she traces to childhood.

“My parents always pushed me to work as hard as I can no matter what I do,” said Morgan, the daughter of Jeff and Erika Legg of Eure. “I have been an honors student since my days at Gatesville Elementary School. I knew I could go beyond the typical high school classes, so I began to take courses at COA to help jumpstart the future I knew I wanted.”

Legg began taking dual enrollment courses at COA as an 11th grader. By that time, she had basically completed the majority of her required high school work.

“The way this (dual enrollment) works is Morgan was allowed to substitute some of the traditional high school courses – English, Math and History – with college courses,” Harrell explained. “It’s the same type of material, only harder at the collegiate level, but you really get more bang for your buck that way…plus you’ve received college credits.”

There are other benefits of the program as well. COA sends one of their history teachers to the GCHS campus twice a week, allowing Legg and other dually enrolled students a traditional learning environment. Additionally there are video conferencing classes with COA teachers.

“You still get that one-one-one instruction through the video conferencing since they are live with a college professor,” Harrell stressed.

For the recently completed Spring Semester, Legg was awarded 19 hours worth of college credit.

“I took the most classes any (dual enrolled) student had ever taken before,” Legg remarked. “My classes included second level Biology, Spanish, Computer Science, Music Appreciation, Art History, and Sociology. My first semester I took Statistics, Public Speaking, and Psychology. I am also currently enrolled in Developmental Psychology, and two Health science courses.” 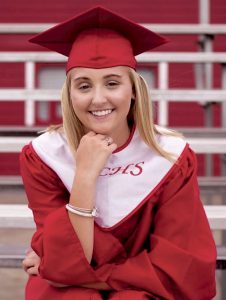 Legg said many of these courses were completed online, but she still had to attend some classes “in-person” at COA. And she somehow still managed to complete the dual enrollment courses while working a part-time job at Doris and Rogers Kitchen.

“Due to my already hectic schedule, I had to schedule these in-person classes at night on Mondays,” Legg said. “Doris and Rogers is closed Mondays, so I took night classes at COA in Elizabeth City.”

Legg admitted that being a dual enrolled student presented other challenges as well.

“The amount of effort and time required is more than that of a regular high school student,” she noted. Before taking dual enrollment classes, I never had to study, the information I heard in class was enough for me. When I started COA classes I was shocked that I needed to learn how to study, especially with online classes where you basically teach yourself.

“I do believe it was worth the extra time and effort I had to put in, but there were times where I had my doubts,” she added. “I wanted to stop while I was ahead, but looking back now I am so proud of myself for continuing.”

“I’m so proud of Morgan, she did it all on her own with the help of Mrs. Harrell,” said Erika Legg. “She is very diligent.”

Mrs. Legg noted the work ethic of her oldest daughter.

“Morgan babysat, she tutored, worked a part-time job, and had a social life….all while maintaining high grades in school,” boasted the proud mom. “I knew what she was capable of and she lived up to that. I held her feet to the fire to make her prove herself.

“Both of my girls are intelligent. I’ve taught them to be self-efficient, to thrive on their own without help,” added Mrs. Legg.

“My parents have been a true blessing throughout this adventure,” said Morgan. “They have assisted me in managing time, keeping high standards for myself and the values I hold. They pushed me through and encouraged me not to give up.”

She also had high praised for Harrell.

“Mrs. Harrell helped me choose classes, manage time, and schedule every single course taken at COA,” Legg remarked. “She also helped me find books for these courses. Without the help of Ann Harrell I would not have been able to complete my degree.”

The educational “double” accomplished by Legg did not go unnoticed at the Central Office of Gates County Public Schools.

“We are extremely proud of Morgan and her accomplishments,” stated Dr. Barry Williams, School Superintendent. “She has not set the bar, she is the bar for students in the future. By accomplishing this unimaginable feat, she has illustrated to parents that dual and concurrent students not only save lots of time and money, but also acquire skills that will serve them well as they pursue higher education.

“Now, because of her efforts of helping Gates County delivering the vision of driving home the value of education and partnering with our parents, we are providing more and more of our students the opportunity to change their lives for the better,” Dr. Williams remarked. “She has exemplified and created an environment that places our high school students in actual college classrooms, completing college courses and the payoff has been nothing short of incredible. Earning an associate’s degree will have huge implications, not just for Morgan, but for generations of students to come.”

Despite all the hard work, Legg said she highly recommends the dual enrolled program.

I encourage any high school student eligible to do so,” she stressed. “The high school pays for these classes, so not only does it save the student and their family money it also provides a solid foundation and transition from high school to college.”

Legg will now build on that foundation as she plans to enroll – as an 18-year-old college junior – at East Carolina University in August. There, she will major in General Biology and then continue at Physical Therapy school to earn a masters degree.

“I plan to become a physical therapist and return home to Gates County to possibly open my own PT practice to better serve our community,” she concluded.