JACKSON – Northampton County citizens came together for a ceremony of honor and remembrances as the county’s annual Memorial Day event was held on Monday, May 27. 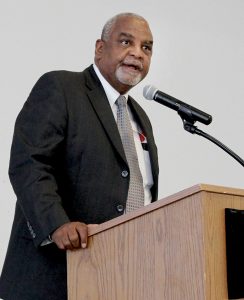 At Monday’s Memorial Day tribute in Jackson, the Rev. Charles Tyner, Chairman of the Northampton Commissioners, was the featured speaker. Staff Photo by Holly Taylor

“As we spend time with our families and friends celebrating Memorial Day, please don’t forget why we have today off. There are many who paid the ultimate sacrifice,” said Diane Hale, Director of Northampton’s Veteran Service Office and veteran of the US Marine Corp, as she provided the opening words to the crowd.

Speaking with her voice full of emotion, Hale reminded everyone of the day’s purpose.

“There are moms and dads who will never get to hear their son or daughter say ‘I love you’ again,” she explained. “There are children who have to grow up not knowing their mom and dad. There are husbands and wives who will never hold the hand of their loved one again.”

Because of the high temperatures Monday morning, the event was moved from its usual place on the courthouse steps in Jackson to inside the Cultural and Wellness Center. Hale coordinated the event which also featured the Northampton Sheriff’s Office Honor Guard to present the colors and lay the memorial wreath, Chowan University’s Lisa Lowry to perform the National Anthem, and retired Army veteran Steve Jackson to give the opening and closing prayers.

Rev. Charles Tyner, chairman of the Northampton Board of Commissioners, was the guest speaker.

“Every day ought to be your day,” Tyner said, addressing the veterans in the audience. “Because without you, we would not be the safe place we are today.”

Tyner noted he was not a veteran himself, having been exempt from serving during Vietnam because he was serving as a pastor then, but he said he was appreciative of every veteran’s service because they kept America safe and free.

He quoted a story in Old Testament scripture about when Joshua gathered stones after the Israelites crossed the River Jordan. The rocks were piled up by the river as a memorial to remember how God carried them through hardships.

“What I’m trying to tell you today is that you’re our rocks,” Tyner explained. “I’m reminded that you were brave enough to go fight for us so that this United States would be a better place for us to live and work and to serve God.”

“Every time we see you, we see someone who has stood tall to make a difference, not only in Northampton County but also in this world,” he concluded his message to the veterans.

Hale’s closing remarks also built on the rock motif, noting that rocks are what make up a solid foundation.

“This country was built on the foundation of our servicemen and women. We would not be the country that we are today if it was not for the ones that served,” she said.

The solemn ceremony was concluded by a rendition of Taps and a quiet prayer, all to honor the fallen soldiers who never made it back home.