Soldiers’ sacrifice is ‘a debt we can never repay’

“For love of country they accepted death, and thus resolved all doubts, and made immortal their virtue and their patriotism.”

WINDSOR – These words were spoken by the future president at the dedication of Arlington National Cemetery in May, 1868 at the precursor to Memorial Day, Decoration Day. 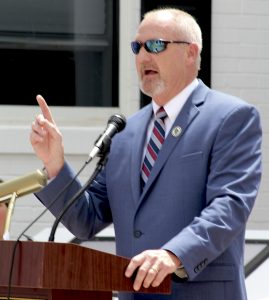 Monday, at the Charters of Freedom Monument, sunning brightly in the morning while shadows crept across the Bertie County Courthouse, a small but patriotic gathering honored the fallen at the county’s Memorial Day celebration.

There’s a saying, ‘A soldier can die twice: once on the battlefield, and once again when he is forgotten.’

Rev. Aaron Wessman, pastor of Windsor’s Holy Spirit Catholic Church practically echoed the words of Abraham Lincoln across the fields of Gettysburg when he told the assembly that they were gathered to honor those who gave their ‘last full measure of devotion.’

Musical selections of patriotic music were provided by Kelsey Ledford with a stirring rendition of ‘Traveling Soldier.’ Later, there were the spiritual words of ‘I Know Who Holds Tomorrow’ by Laura Davis.

But the two main speakers were veterans who had felt the pain of the loss of loved ones in combat service: Menola Baptist Church pastor Rev. Willie McLawhorn and retired USAF Colonel Brian Davis – both natives of Bertie County.

McLawhorn was making a return to the Windsor podium, having spoken here for the July Fourth celebration. It was there he reminded those the difference in the celebrations and tributes to those who serve.

“There’s Armed Forces Day (celebrated on the third Saturday in May), and there is a day in November when we remember those who served and came home,” he acknowledged. “Today we honor those who served, and gave their lives, but did not come home.”

McLawhorn is a Gold Star parent, having suffered the loss of his only son, Sgt. Will McLawhorn, who was killed in action while serving in the U.S. Army stationed in Afghanistan.

In 2006 the younger McLawhorn enlisted in the U.S. Army and officially became an infantryman in 2007.  He later graduated from Air Assault training and earned his Air Assault wings. In 2010, McLawhorn deployed with his unit to Afghanistan where he tragically died that same year.

Rev. McLawhorn gave a history of Memorial Day and closed with a personal reference to his son’s final 18-hour mission and his final journey home in a poem by one of the parents in honor of the five who died with him; six men that were a mosaic of America.

“Look into the eyes of these brave men in heaven, so they can see where you stand; and, bless these brave soldiers as you take them into your hands,” the reverend recited.

“Memorial Day we gather and we remember,” he intoned. “But for those who have experienced the death of a loved one, every day is Memorial; honor those who gave their lives for our freedom. Not only this day, but every day.”

Davis delivered the keynote address. Currently the director of the Defense Personnel & Family Support Center at the Pentagon in the nation’s capital, he formerly commanded the 507th Air Refueling Wing until his retirement in 2016.

One poignant remembrance was when he refueled the transporters at Dover Air Force base returning with the remains of the fallen.

“What a price they paid,” he reminded. “What we can do is what we’re doing here today. Gathering together and celebrating the fact that these men and women who’ve given their everything – the last full measure – bless those who have died for us’ what a price they have paid for us. It is not a debt that we can repay.”

Lewis Hoggard, director of the Windsor-Bertie Chamber of Commerce, thanked the group as tokens of appreciation to veterans made by students at Lawrence Academy were handed out.

In his Benediction before dismissal, Rev. McLawhorn gave a reminder of the sacrifices that were given, comparing it to the crucifixion and sacrifice of Jesus.

“During this day as we remember the fallen heroes,” he prayed, “let us remember their families and offer them comfort and peace; and guide us with lives worthy of that sacrifice.”

Moving one space over

WINDSOR – In an effort to increase management capacity within the County Manager’s office, the Bertie County Board of Commissioners... read more