CONWAY – The town of Conway celebrated Memorial Day here Monday during a 10 a.m. ceremony. Seventy-seven individuals assembled to honor fallen or missing in action soldiers who lost their lives along with their surviving loved ones. 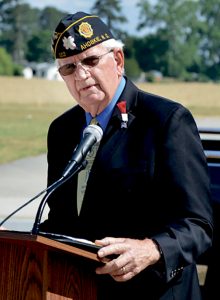 Conway Mayor Tommy Barrett (U.S. Air Force 1966 – 1970) welcomed everyone and introduced Commissioner Lokie Majette (U.S. Army 1966 – 1997). Majette shared a prayer of thanks. He continued by asking God’s blessing on the veterans’ who gave their lives in service so we can have freedom.

Pam Brett led the crowd in the singing of the National Anthem. Everyone recited the Pledge of Allegiance.

Barrett stated that after high school Hutchinson joined the Marine Corp.  He received an Honorable Discharge in 1966 as Sergeant E-5. He graduated from Elizabeth City’s Mid – Atlantic Christian University.

Moving to Ahoskie in 1974 he taught heating and air conditioning at the community college for 23 years.

“Today we remember lost lives on the battlefield. Over 1.1 million lives were lost in defense of our freedoms,” Hutchinson said. “We honor these soldiers whose blood have paid the way for freedom of religion, the press, speech, to vote, freedom to assemble and the right to a fair trial.  Those soldiers pledged all to the flag, served under the flag, died for the flag, and covered by the flag to honor these fallen soldiers.”

Hutchinson then talked about lives lost in the American Revolution, Civil War, World War I and II, Korean Conflict, Vietnam War, Iraq War, and to present. The Civil War was the costliest with 498,000 lives lost. Most everyone knows the 58,000 lives lost in Vietnam. In the current battles against terrorism, the casualties are 10,000 and counting.

These wars and conflicts are proof of the fragility of freedom and democracy and absolute necessity to protect these ideals.

“Soldiers really didn’t want to kill each other, but each side has pride of country,” Hutchinson noted.

As an example, he told about American and German forces entrenched facing each other with No Man’s Land between them.  Somehow a German soldier got shot and entangled in barbed wire.

He then talked about Old Glory. He pointed out the various colors, stars, and stripes and their symbolism.

In conclusion, he reminded everyone to set their clocks for 1500 hours or 3 p.m. as his wife insisted. This allows everyone everywhere to give a unified salute for our fallen and lost soldiers.

Nancy W. Jenkins (Town Administrator) delivered the Benediction and then gave her sincere thanks to all who attended.

Soldiers’ sacrifice is ‘a debt we can never repay’