Queen of the Caroms

RICH SQUARE – In a game that places more emphasis on flashy drives, long-range three-pointers, silky jump shots, and smooth crisp passes, it’s hard for the players who do the ‘dirty work’ to get their due.

Not so for former Northampton County High basketball player Rashauna Grant, who parlayed her rebounding ability – she owns the North Carolina state girl’s basketball record by snatching down 2,004 career ‘boards’ – into a college scholarship. Grant will attend Cape Fear Community College in Wilmington beginning in the fall of 2019, hoping her success there will lead to furthering her collegiate career at an NCAA Division I or Division II school after her junior college days are over. 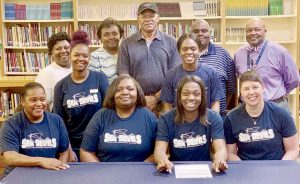 “I never really had that much interest in playing basketball until I was in the sixth grade at Conway Middle School.” Grant recounts. “I was always more interested in running track.

Others saw far more potential and when she reached high school at Northampton High in 2015, veteran Jaguars girls basketball coach Jerri Squire saw that Grant could be so much more.

“What I witnessed over the years and the progress we’ve seen is the determination,” said Squire. “She’s quiet on and off the court, but she not only does what she’s supposed to do; she also takes on the responsibility of some of the other players.”

Grant’s efforts aided the Lady Jaguars in winning no less than 19 games every season, including a 20-8 mark this season where they won 10-of-11 games at one point in the season and finished runner-up to Weldon in the 1A Tar-Roanoke Conference girls basketball race. The Jags had also made at least the third round of the playoffs before this year they were nipped by Vance Charter School in the second round.

With a career average of 18.8 points in scoring, a whopping 20.4 rebounds, 3.4 steals, and 1.6 blocks, Grant naturally attracted quite a few colleges; getting notice from Catawba, UNC-Pembroke, and D-I Norfolk State. But a recruiting visit to the Port City sold her on the Sea Devils, where she hopes to study physical education with sights on becoming an athletic trainer.

Losing quite a few of her playmates to graduation left Grant with bigger responsibilities on the court this season, but Squire says Grant made the grade.

Grant has her sights on a pro career if her trajectory of progress and success on the court continues with her development. Known primarily as a defensive player, she’ll do more running and working on her shot as she prepares this summer and in the fall. Over her four-year high school career, she improved her rebounding to where her average now exceeds 20 caroms per game. But she insists the credit must go first to everyone who pushed her to succeed.

“I have to thank God first of all,” she humbly remarks. “Afterward comes my family and my coaches because they helped me get through a lot of stuff, and anyone else who pushed me, because I never really thought I’d end up here.”

WINDSOR – Motivation helps define Akyia King. “My Dad is hard on me sometimes,” she recalls. “A little too hard,... read more