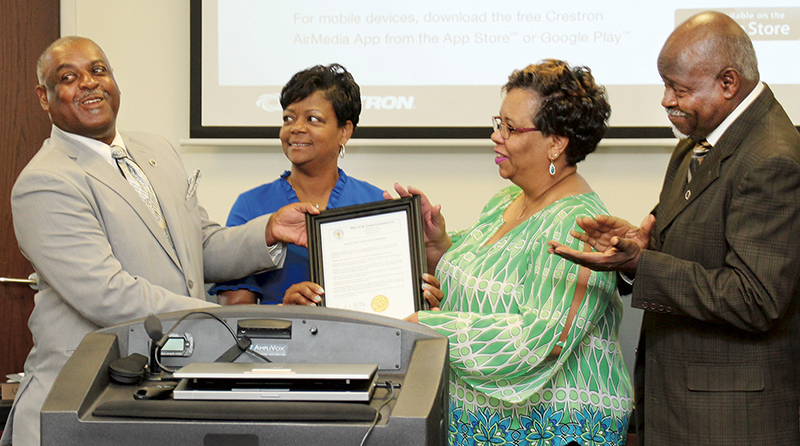 WINTON – A local nurse has been praised for her swift action that successfully aided a man suffering from a medical condition while attending a church service.

Earlier this month, the Hertford County Board of Commissioners adopted and presented a Resolution of Bravery and Heroism that signaled out efforts of Wanda Ashe-Moore.

Dr. Renee Fleetwood, Clerk to the Commissioners, read the Resolution into the official record as Ashe-Moore stood to be recognized.

Citing her 25-year employment with Vidant Roanoke-Chowan Hospital, where she is the RN Nursing Supervisor, the Resolution pointed to Feb. 24 where Ashe-Moore “responded quickly and executed lifesaving techniques on Mr. John P. Rankins, citizen of Hertford County, in an emergency situation” at Union Second Baptist Church.

“Her actions are indicative of her character and work ethic as an RN Nursing Supervisor of the Vidant Roanoke-Chowan Hospital staff,” the Resolution stated. “The Hertford County Board of Commissioners recognizes the untiring, outstanding, and meritorious efforts of RN Wanda Ashe-Moore.”

The Resolution publically praised Ashe-Moore for “her responsibility in saving the life of Mr. John P. Rankins and being in attendance at the ‘100 Men in Black Program’ on Feb. 24.”

“Mr. Rankins had a medical emergency and Wanda Ashe-Moore rendered quick aid to him and stayed with him until (Hertford County) EMS got there,” recalled Hayes. “Mr. Rankins made it through.”

Rankins was on hand at the Commissioners meeting and shared his thoughts on Ashe-Moore’s lifesaving efforts.

“I’ve been knowing her for a long time; we were classmates (in school) and co-workers at one time at the hospital. She’s my hero,” Rankins remarked. “I would also like to thank Sheriff Hayes and his department and James Broglin and his department (Hertford County EMS) for all they did.”

Rankins added that he is a former volunteer with the old Ahoskie Rescue Squad.

“I can tell you that it’s not a very good feeling to be in the back (of an ambulance) as a patient,” he said with a laugh. “But I made it; there is a God.”