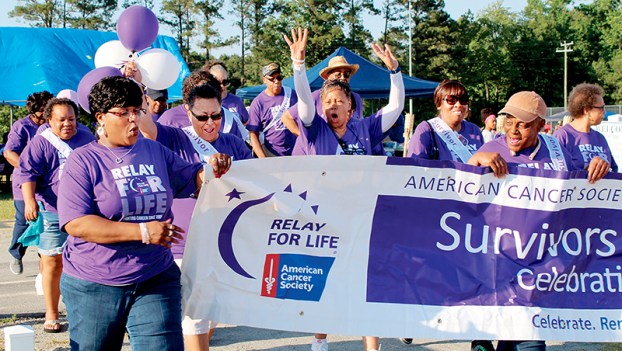 Cancer survivors rejoice in another day of life as they line-up to walk the first lap at Friday’s Northampton Relay at the Cultural & Wellness Center in Jackson. Staff Photo by Holly Taylor

JACKSON – Follow the yellow brick road, or in this case, follow the gravel-covered half-mile walking trail at the Northampton County Cultural and Wellness Center in Jackson.

The county’s eighth annual Relay for Life event was held here on Friday, May 17 with many people from the community coming together to raise money for cancer research. The grounds of the facility were filled Friday afternoon and well into the evening as people set up tents, watched entertainment, and made their laps around the track.

The theme this year was “click your heels together and follow the yellow brick road to survival land.” That Wizard of Oz-inspired idea encapsulated the optimism the event brings to cancer survivors and caregivers as it encourages people to keep moving forward and to not give up hope.

May-Barnes noted that ACS fundraising money has been used over the years to develop a number of cancer treatments and prevention methods such as chemotherapy, pap smears, and mammograms. She also mentioned services such as the Hope Lodge that cancer patients and their families can use as a place to stay while receiving treatment. Almost 150 residents of Northampton County have utilized that resource already, May-Barnes added.

“I share this information with you because I want you to know why you’re here tonight and what you’re supporting,” she concluded.

The opening ceremony portion of the evening concluded with a special Survivor’s Lap around the track, followed by another one to honor caregivers. After that, the relay was officially underway until the event concluded at midnight.

Unlike last year where rain forced all activities to be held indoors, sunny skies and a nice breeze allowed people to set up their tents and enjoy a variety of entertainment outdoors.

Some tents offered activities, such as a game of bingo sponsored by the Budding Roses and AKA Gents youth groups of the local Alpha Kappa Alpha sorority. Other tents had people lining up to purchase fish plates, chicken wings, funnel cakes, and more food options. By the main stage, talented performers from all over Northampton County showed off their skills in song and dance.

But the highlight of the annual event was the luminary ceremony to commemorate those who have fought against or are still fighting against cancer. Two cancer survivors, Deborah Morrison and Monte Freeman, shared their stories, putting special emphasis on how support from family and friends got them through their diagnosis and treatments.

Morrison, a magistrate judge in Hertford County and mother of two daughters, is a 12-year breast cancer survivor. As she recounted her story, she mentioned her friend who had urged her to go to the doctor when she started noticing a tender spot in her breast.

“I knew she would keep calling so I made that appointment. I’m so thankful for her, and I’m glad I did,” Morrison said. “We are our sister’s and our brother’s keeper.”

Morrison was diagnosed with cancer three weeks before Thanksgiving, and her doctor wanted to schedule the lumpectomy surgery the same week as the holiday.

“I was trying to put off the surgery until after Thanksgiving because I didn’t know who was going to cook the turkey,” she recalled. “We’re always taking care of others first.”

Her biggest supporters were her daughters, who comforted her when she decided to shave her head before chemotherapy, and her mother, who unfortunately passed away on the same day Morrison finished her radiation treatments.

“We have all been touched by cancer in some way, and we are challenged to share our light in the fight against cancer. It has been 12 years and I am so blessed to be here today to share my story,” Morrison concluded.

Freeman, principal of Gaston Middle School with 20-plus years of experience as an educator, is a 13-year survivor of Non-Hodgkin’s lymphoma. He shared his story about what he did right and what he did wrong when he got the news of his illness.

Freeman had gone to the doctor for a cold, and the doctor discovered a lump on his neck.

“We’re not waiting. We’re going to check it out now,” he said he’d told the doctor, noting that was one of the “right” things he did. “Early detection is the key.”

“Because I’m a private person, let me tell you something that I did wrong,” he continued. “I didn’t tell anybody else.”

He only shared the news with a handful of necessary people, including his best friend, his boss, and his brother. For weeks, Freeman said he drove himself to chemotherapy appointments in the morning and then to work afterwards.

He recalled his brother’s words when he found out Freeman hadn’t told his mother or other family what he was going through.

“You come from a praying family,” his brother told him. “How dare you not use a resource that you have such as prayer.”

Freeman wrapped up his speech by reminding cancer patients that they don’t have to go through it alone.

“For those of you who are dealing with cancer, walk strong in your faith, depend on those who are going to pray for you, and you too can declare, I am a cancer survivor,” he said.

The phrase often repeated at this year’s Relay event was “there’s no place like hope.” There was certainly hope in abundance from those in attendance as they worked together to get one step closer to a cancer cure.

WINDSOR – The Bertie County Relay for Life was just one of many communities across the country that came together... read more