MURFREESBORO – In the competitive world of whole hog barbecue cooking, a rookie chef stands as much chance at winning as does a high school football team pulling off an upset of the New England Patriots. 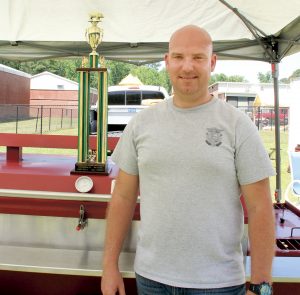 Brand Copeland poses alongside his borrowed cooker that he used to grab the first-place trophy at the 18th annual Roanoke-Chowan Pork Fest held Saturday in Murfreesboro. For more photos from the event, visit the RC News-Herald’s Facebook page. Staff Photo by Cal Bryant

Brand Copeland beat those long odds here Saturday as the Bertie County native entered his first-ever cooking competition at the 18th annual Roanoke-Chowan Pork Fest and walked away with the event’s top prize.

“This is my first go-round on my own,” said Copeland, whose team entry was appropriately named “Law Dogs” in reference to his full-time job as a Trooper with the North Carolina State Highway Patrol in Chowan County.

He gave accolades to his mentors, “The Pocosin Boys” – veteran swine chefs Mark Copeland and Billy Perry from Bertie County.

“I’ve learned a lot from them while helping them cook at other competitions,” said Brand Copeland, who now lives in Gates County. “They even let me borrow one of their old cookers to use here.”

“We cooked over at the Bird Park in Scotland Neck a couple of weeks ago and he helped us there; as a matter of fact we finished in first place,” said Mark Copeland. “He caught on pretty good.

“Here in Murfreesboro, me and my brother (Perry) were telling him certain things to do and he apparently was listening,” M. Copeland continued. “He cooked a mighty pretty pig – the skin turned out real good – and with the final results the judges thought so too.”

The cooking process lasts around 10 hours.

“We like to start out with a low and slow temperature and then slowly creep it up (the temp) throughout the night,” M. Copeland said.

When asked about his level of surprise upon hearing his name called for first place, all Brand Copeland could do was shake his head in amazement and laugh.

“We were just as shocked as Brand was,” said Perry. “Mark and I have cooked together for 14 years and won only twice. Here comes Brand and he’s one-for-one.

“Maybe we taught him too well,” Perry added with a laugh.

Finishing as the runner-up was Billy Narron of Wicked Pig BBQ while Beach Boys BBQ (Chris Fineran and Steve Sumner) placed third. Rounding out the top five among the 15 total teams were Raymond Miles and D.J. Stocks.

The annual R-C Pork Fest serves as a fundraiser for the Brady C. Jefcoat Museum. Once all the barbecue is judged, it’s finely minced, covered in Murfreesboro’s secret sauce, and served with cole slaw, potatoes and hushpuppies to those in attendance.

AHOSKIE – Three separate armed robberies over the course of less than 31 hours have Ahoskie Police searching for suspects.... read more