“My Dad is hard on me sometimes,” she recalls. “A little too hard, maybe, but it pushes me. It’s from my Mom that I get my humility.”

A three-year starter at Bertie High School, King will enter a new phase of her life athletically and academically after signing a National Letter of Intent to attend Cape Fear Community College in Wilmington. She becomes the third ex-Falcon player to head south to New Hanover County after De’Najah Porter (2016) and Autum Morings (2017). 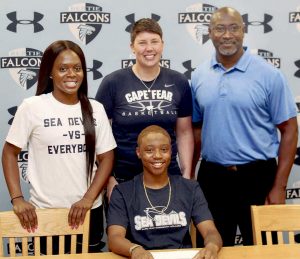 In nearly 100 games for the Lady Falcons (95), King averaged 16.2 points per game (over 21 ppg her senior season), 5.4 rebounds, 3.2 steals, 2.1 assists, and 0.6 blocks per game. She scored 1,543 total points, including 146 three-pointers, and was voted Northeastern Coastal Conference Player of the Year in 2019 after making the All-Conference team all four years of senior high school. She also did it despite missing two games as a sophomore and 10 games her junior year, both recovering from knee surgery. That last part also played into her college decision.

“After I tore my ACL a lot of schools wrote me off, but they didn’t – even though I had two years left,” she said. “It felt like home, like I was wanted there more than some of the other schools; I just feel like Cape Fear is the best place for me.”

A three-sport athlete at Bertie, King abandoned volleyball and softball her senior season to concentrate on basketball and credits it having paid off.

King cites former Lawrence Academy player Lauren Baker another motivator. While the pair never played together on any level, they have worked out and trained. Baker, who did not play sports this past spring, will attend UNC-P on a softball scholarship.

“She’s been through a lot of tragedy,” King noted, in recounting Baker’s health challenges and how well she has coped. “It’s been quite an inspiration to me, because she’s the strongest girl I know. She believes life is all part of His plan, and everything will work out.”

While there was much in the high school game that came easy for King, she’s also motivated to improve the varied aspects of her game, with emphasis on ball handling, adding weight, and maintaining her speed.

“I know I can shoot and run the floor, but it’s the little things I want to be better at,” she acknowledged. “Basketball’s not an easy game, but with things like passing, sometimes it’s that little fingertip of space that can make a difference.”

King refuses to watch video of the game in which she was injured.

“It was the worse day of my life, and the worst pain I ever felt,” she recounts.

In college, King wants to study Business Administration or something in the medical field.

“I’d like to do something in sports medicine or biology,” she said.

After her two seasons at Cape Fear, King hopes for a chance at the next level at a Division-1 or Division-2 school. For now, she’s just looking forward to the competition.

“Nothing is given,” she maintains with a sly grin. “When I earn it, I want to leave no doubt.”